Who’s a good DC foil for the 9 pre-existing Marvel characters that make up the team in the new Midnight Suns video game. (Or just who are some DC characters that would make a cool team if they got together?)

But for the first question of “who’s a good DC foil to the 9 Main characters”: 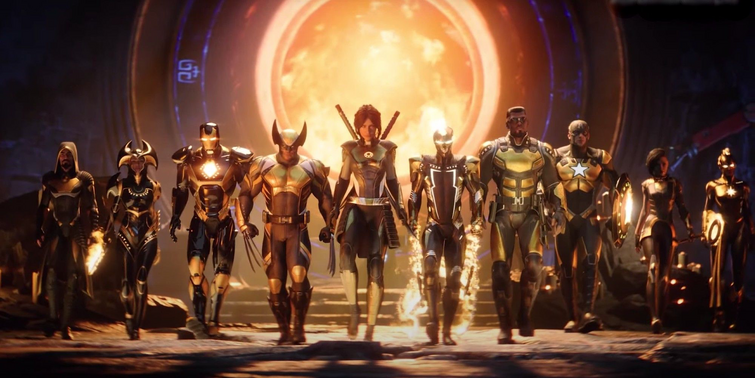 Yeah Captain America came out about a year after Shield did

The Shield (Joe Higgins) debuted in 1939 in Pep Comics #1, created by Harry Shorten and Irv Novick.

The Shield was the first superhero with the american flag on him, after the debut of Captain America that kind of superhero became more and more popular, leading to many characters such as Captain Battle and other patriotic heroes.

MLJ sued Timely Comics for plagiarism due to Captain America's first shield (the triangular one) being so similar to the Shield's attire. That's why in the second issue of Captain America Comics Steve is using is iconic round shield.

Personally when it comes to the Captain America/Peasemaker question my opinion is similar to the Wolverine/Lobo answer. Because aesthetically Peacemaker and Captain America are both very similar but in terms of personality and intentions they’re very different. I think Peasemaker is a good foil to Captain America, or, hell, a Captain America type in look, and general abilities. And Peacemaker’s purpose is a lot like Captain America’s on the surface, or at least that’s what is supposed to look like to the public.

Originally, Peacemaker was less fixated with the USA government. I mean he wasn't a government agent.

His normal job was a diplomat and he wore a red, white and blue costume.

But we must consider Captain America was a propaganda hero. He was supposed to embody USA and its values, while Peacemaker is just a guy who uses his gadgets and abilities to solve international problems.

The concepts are pretty different.

I think he still is a a former diplomat as of the new SS book. Still a lot more of a delusional nutcase than his Charlton counterpart

Ok but look-wise they make sense

Also Peasemaker was a member of Project Peasemaker which was sanctioned by the Agency which was Sanctioned by the government so regardless of wether or not he was a government agent or not in the silver age (which by the way, if your a diplomat you’re part of your government) he definitely was in the Post-Crisis 80s/90s era and just like the Comedian in Watchmen (who’s literally based off of Peacemaker) he works as a much more realistic interpretation of a U.S. propaganda character, a parody of a U.S. propaganda character, if you will. While Captain America is a legitimate U.S. Propaganda character, at least originally in the golden age. Parody or not Peacemaker and Captain America still have that All-American soldier feel to them which is why I say that Peacemaker is an acceptable, if not thematically interesting, answer to my question of “Out of the Midnight Suns cast who is a DC character that could take their place?” in this case Captain America.