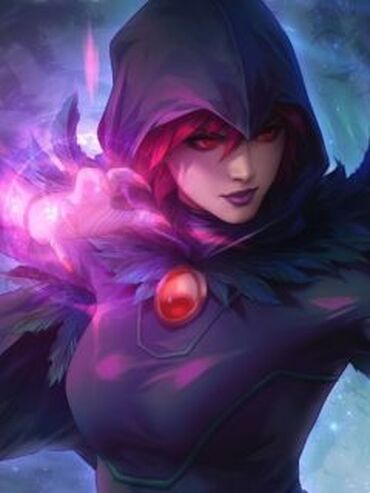 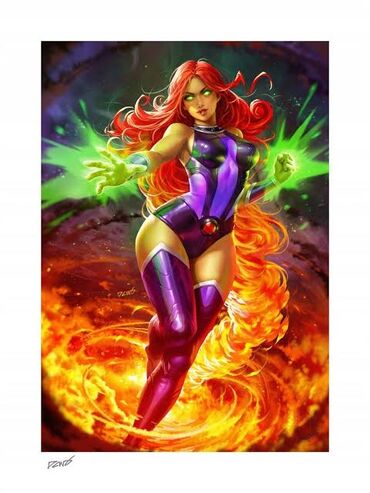 People over-think Raven’s capabilities. She’s a glass canon. She has a number of capabilities, mostly not offensive in nature, but she traditionally is easy to incapacitate if overwhelmed physically. She has good defenses, but she’s not as strong as popular media has made her seem to those who’ve limited comic readings. Honestly, for the first few decades of her publication history, she was a “support” member of the team, largely not participating in battles (heck, she was even pacifistic and didn’t actively fight during the better part of the first decade of her existence).

Starfire is swift and strong. If she can get to Raven, one blow should stop our beloved mistress of magic. Undoubtedly, Raven could win some scenarios. But I do believe Starfire could perhaps win more of the many ways this could play out—at least with Raven in her right mind and standard set of abilities (which have limits compared to when she’s given into the Trigon influences and becomes more powerful, even physically).

This list needs updated, as it’s been a few years, but here is a description of Raven’s abilities over the years and how they work in practice.

Raven's powers come from a mix of being the daughter of the inter-dimensional demon Trigon and the teachings from the mystics of Azarath.

In her first few appearances, her creator Marv Wolfman was still figuring out how he wanted to have her powers work. She was able to force emotions onto others, but that was later removed from her move-set. Even more than that, she showed once or twice the ability to cast illusions and make people see and experience things not really there. That was removed wholly and swiftly. It was essentially retconned out of her abilities. And lastly, Raven had mild precognitive abilities near the beginning of her character's creation. They took that away as well. That makes sense, though, considering Marv was still working on how he wanted her powers to work. I noted these so that you'd know they at one time happened, but know that they had been retconned almost immediately and that you shouldn't consider them part of her powers.

Her primary ability is Empathy. She can sense emotions of others, often in great abundance. This isn't telepathy. She can't read thoughts, just emotions. Her abilities aren't foolproof. Those who have a good control over expressing their emotions have been able to trick her (Eric Forrester for example). But the ability is still undoubtedly useful.

An extension of her empathic abilities is her empathic healing power. Upon making physical contact with someone, she can take away someone's pain, injury, or sickness into herself. This induces rapid healing in the person she's touching. When she takes it all into herself, Raven is temporarily afflicted by what she absorbed, and she feels it all at a rapid rate; however, she is soon also relieved of the injury, pain, or illness. This power isn't absolute. She cannot heal fatal wounds or illnesses with no cures or treatments. In these moments, she can still take the pain away for however long she is touching them, which she has done for a fatally wounded person before.

Her other primary power - and the source of many of her "sub-powers" - is the ability she has to summon her Soul Self. Her soul self is an astral projection of her soul, usually in the shape of a shadowy bird. She can project her consciousness into her Soul Self, allowing her to think and talk from it. The Soul Self can act independently from Raven's physical body, with each performing separate tasks (both are still Raven, though). Sometimes, though, Raven has made her physical body meditate or otherwise be still while her Soul Self is on the move.

Raven cannot be separated from her Soul Self for an extended amount of time or else "something catastrophic" will happen. In all of her pre-Flashpoint history, what would happen is never revealed. Many assumed that meant Raven would die. The recent Raven miniseries revealed that if she's separated from it for too long, it would cause an implosion large enough to wipe out a great amount of space, comparable to a nuke. Technically, we can only take this as being factual to the Prime Earth version of Raven because it's the only universe that specifies that. However, because that explanation was created from Raven's creator himself, it may be fair to believe that's the case for pre-Flashpoint Raven as well.

Raven can to some extent control the size of the Soul Self. The default size seems to be about equal to Raven's physical body size, but it has been shown to be larger, often for uses as described below.

The Soul Self itself has many abilities. It can be intangible if Raven wants it to be, and she has often used it to scout because of its ability to move through solid matter. In her first incarnation, Raven wouldn't get physically involved in combat. She was a pacifist. Instead, she would send her Soul Self on the offensive. Whenever it enveloped a target, that target would experience horrors or their own personal nightmares, leaving that person quivering and traumatized. She has also used it to soothe the frantic. The Soul Self isn't infallible, though. Some have used physical force to break through the Soul Self and make it go away. Note that whenever the Soul Self is attacked in this way and disperses, it reforms afterwards intact but the psychic backlash can affect Raven.

The Soul Self can be used defensively, too. It has a quality of spatial manipulation about it. The Soul Self is connected to the other dimensions, primarily Azarath. As such, she has used her Soul Self to absorb items and other projectiles aimed at her. For example, she has made the bird-shaped shadow grow large enough to catch a great deal of falling debris. Whatever goes into the Soul Self, though, it has to regurgitate before it can enter Raven again. She has used this ability to transport people, too, taking them into her Soul Self and then releasing them afterwards. This has shown that people who go inside it aren't necessarily traumatized. It also shows that whatever extra-dimensional space they go to while inside the Soul Self can be safe enough that they weren't negatively affected by going there.

This inter-dimensional quality is what allows Raven to teleport. In an instant, she would summon her Soul Self and it would wrap around her and she'd teleport in a puff of smoke that would immediately dissipate. She can teleport vast distances (in one interview, Wolfman said he imagined it being at most about 100 miles at a time, but Raven has teleported further distances before -- albeit with great strain). She can teleport herself with ease, but she can also teleport others with her at the expense of more energy. She has also used this ability to teleport to Azarath.

Besides the Soul Self, Raven still has more powers. After her soul was cleansed of Trigon's evil and Raven took to wearing a white cloaked uniform (which she did for about a decade), Raven regained the ability to directly affect emotions -- or "push emotions" as it's sometimes called. She had to be careful not to accidentally subconsciously do this. But it was a handy ability to have for a while.

At one point, Raven dies and is later reborn into a new teenage body. When she's reborn, her powers slightly change. She loses the push emotion ability. But she gains flight and some lower-mid level of telekinesis (which she only used occasionally).

Whereas her original incarnation didn't fight physically, the reborn Raven was a much tougher girl to handle. She still didn't engage in physical combat that much, but at one point, she singlehandedly defeats her three evil demon brothers in combat. Raven uses a combination of hand-to-hand combat and tactical teleportation to beat them. It was quite an impressive battle.

While this has been more contestable, even pre-Flashpoint Raven seemed to possess the ability to perform magic -- but she very seldom actually showed signs of this. Most of it was simply hinted at, however aggressively. During the battle with her brothers, though, she does release fireballs and an electric attack from her cloak. This could have been magic (it certainly was odd for her to do these things at all). Zachary Zatara had also come to Raven, asking if she wanted to practice magic together. She said something along the lines of "not now." She was taught by Azarath mystics, so it's possible she has some capacity for it -- even if she doesn't actually regularly engage.

Regardless of whether her pre-Flashpoint version possessed or didn't possess magic, her Prime Earth version has been described as a sorceress multiple times -- she herself referring to her magic. She has done some feats with this magic besides the abilities usually attributed to "Raven."

Speaking of Prime Earth Raven, her powers seem to work differently as well to an extent. She seems to have her Soul Self; however, in addition to its regular abilities, she has made it have tendrils of shadow elongate from the source and wrap objects or foes. She claims in her series that she herself cannot fly, but I do believe she has been shown traveling through the air, which may be attributed to "catching a ride" with her Soul Self. I'm sure it'll be addressed in more detail later. In addition to traveling through space, she has used her Soul Self to travel through time. It is unknown, though, whether this will be a recurring ability or if it was used one time by that one writer. It's possible other writers won't touch that idea.

Raven has also done this thing where she creates a circular swirling mass of shadow that she can walk through and emerge from the other side. She did this to enter a closed door, but it's unclear whether the shadow made a circular gateway that made the door intangible enough for her to walk through or it was a type of portal making ability where she walked into one portal outside the building and exited a portal inside the building.

It's painful seeing these results.

Raven is the duaghter of Trigon the destroyer of worlds and a mortal Woman who Trigon raped If I am correct.

In justice league Dark apocalyps movie, she contained Trigon in her pocket dimension inside the gem/crystal in her forehead and when Trigon said that he Will kill Damien when he gets out raven is a little scared but that all,

Well yes AT the ending Trigon is unleached from the chains of ravens dimension but doesnt control her she controls Superman If I am correct.

Don't base your view on Raven on Apocalypse War, or Teen Titans. Read N8's post. It's as accurate as it is humanly possible to be.

Kori. For all the Reasons by other users.

Starfire in popularity Raven in a fight

Raven in popularity, Starfire in a fight.

The Darkness vs The Light. Classic

No, not the Darkness vs the Light. At all.