I would kill for a Green Arrow video game.

Can I choose a favorite?

0n the left of the page where there is a boat with her name on it.

I read the first five volumes of her New 52 series, currently reading her new series and I read a little bit of her 2002 series.

Today, I just picked up the special Catwoman series because she is one of my favorite DC characters and I think it's worth a read! I liked the exploration of the different Catwoman suits over the years and adaptations of Catwomans such as Michelle Pfeiffer and the Batman TV series. My favorite story from this would be The Art of Picking a Lock because I really loved the 2002 suit and the art was beautiful. Another thing that the story won me over was all of the references of the past and future Catwoman actresses thrown around the pages: Anne Hathaway (my favorite one), Zoë Kravitz (who I'm sure will kill it in the Pattinsonverse), Halle Berry (let's just don't talk about her movie), Lee Meriweather, Ertha Kitt (the last two I never payed attention to), Camren Bicondova (who did an excellent job as a younger Selina Kyle), Michelle Pfeiffer (one of my favorites), Adrienne Barbeau (who was a great voiceover for the character in Batman: The Animated Series). The one I found interesting was The Catwoman of Earth. Tell me what are your thoughts if you have read the comic.

I thought she was good. A solo Black Canary movie would be interesting.

The one and only Barbara Gordon! I wouldn't stop at dating. I would marry her! 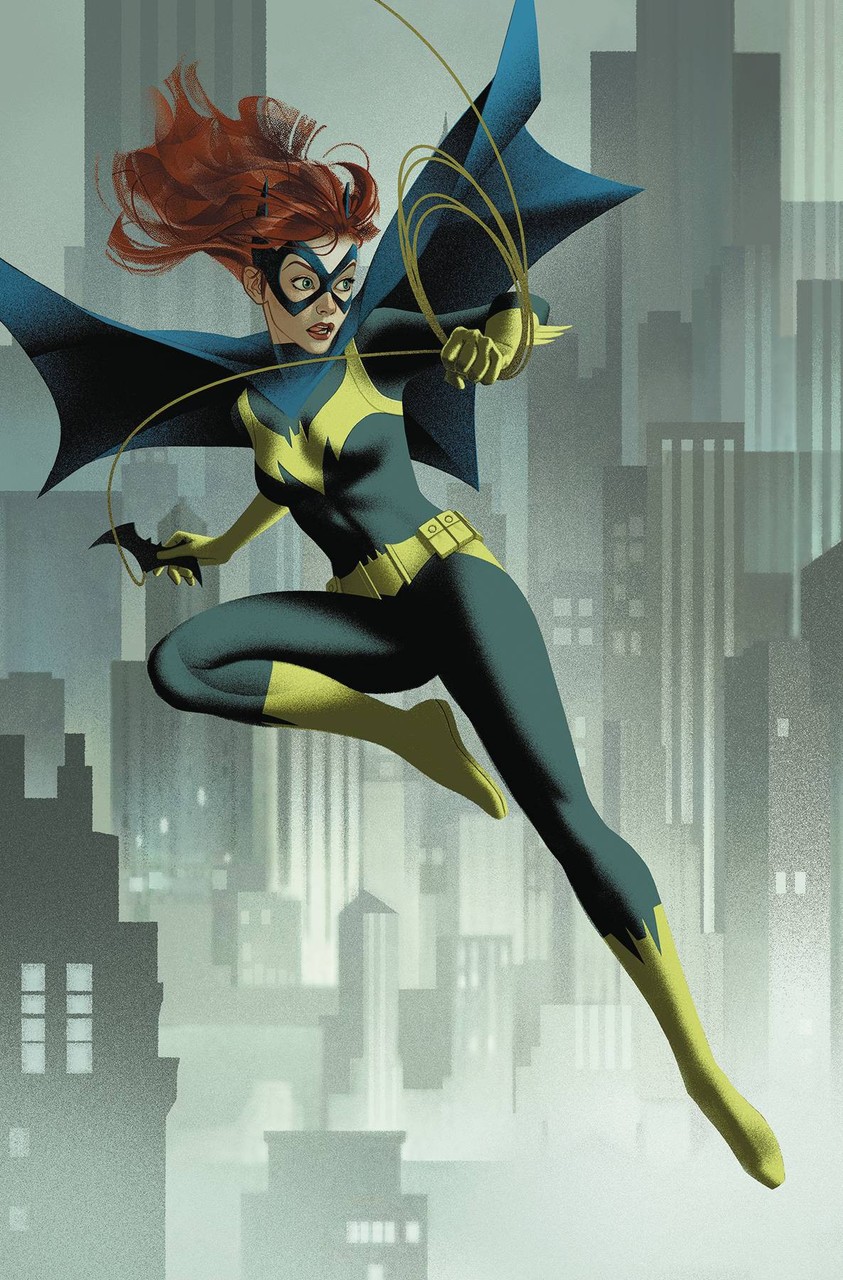 Definitely Huntress. She dosen't appear in many cartoons or video games and her last appearance in the Arrowverse was back in 2014. Hopefully she will appear in the next Injustice game because if Joker can appear in the next one after he died, then I guess anyone can.

@SforHope She is more than a thief. She's a great fighter and a good person towards others. Also, she has some great stories such as her current series with her adventures in Villa Hermosa taking on Raina Creel.

Who is everyone's favorite female comic book character? Mine is Catwoman because she is just an amazing character. She does have her morals for when it comes to stealing, she has a good heart towards others and she is the one true woman for Batman. I believe I was first introduced to Catwoman by her first appearance in The Batman cartoon. Ever since her first in that cartoon, she remains as one of my favorite comic book characters! 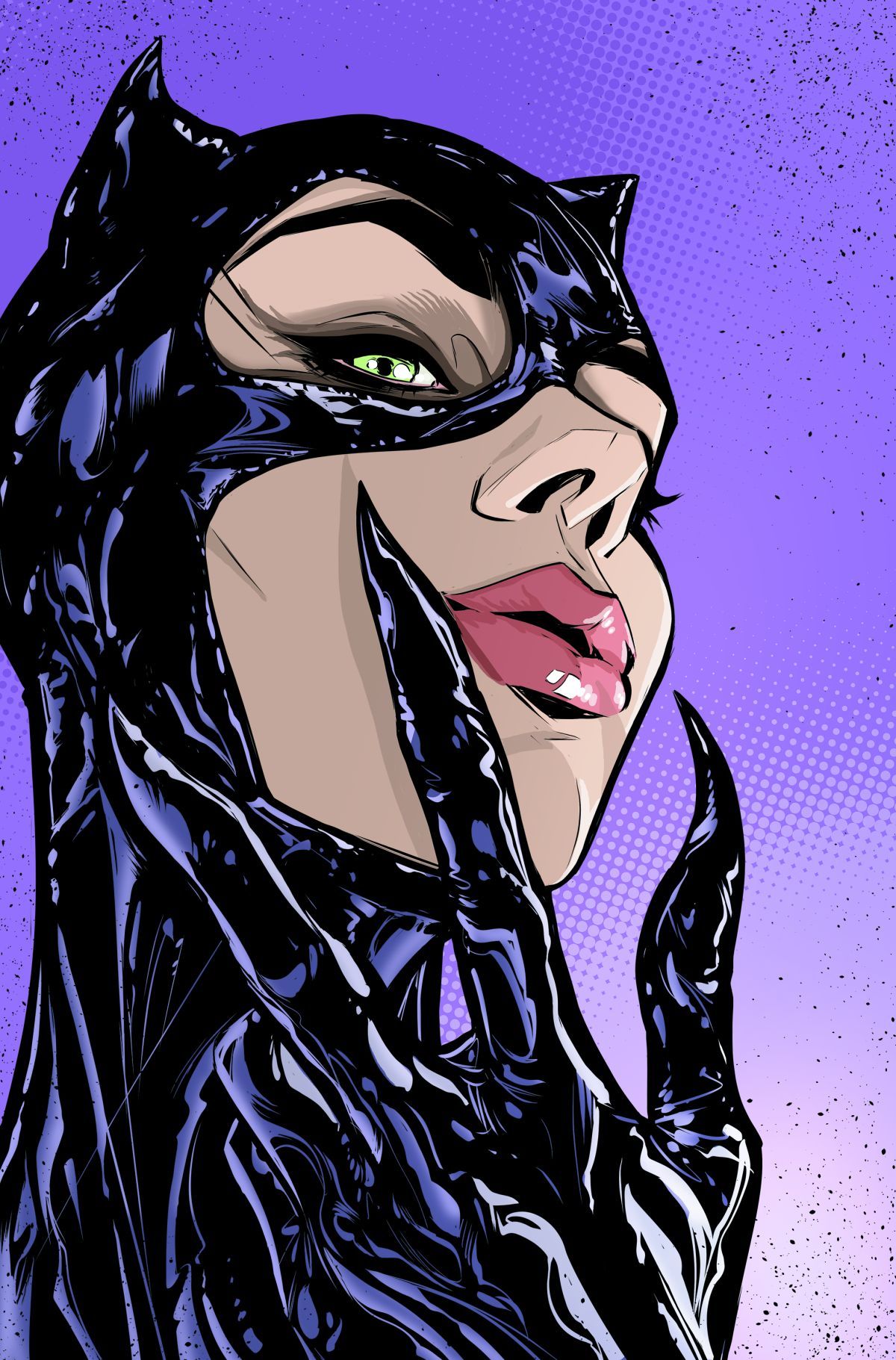 Yesterday, I just picked up the new Batgirl graphic novel, Old Enemies. It collects issues 30-36 and it's starting to make me have mixed feelings of Batgirl. One drawback to Batgirl lately is that I think her methods are getting too extreme. For example, in the issue where she finds out James was released from Blackgate, she started to interrogate people into finding where he's at even by hanging James' parole officer over a staircase. One thing that I'm liking about Babs is her being a lone wolf. She fought the Terrible Trio and Cormorant all alone. Although she lost Gordon Clean Energy for being involved with Ivy, she still manages to look on the bright side of things. I didn't think I would be saying this, but I'm actually starting to like her new suit. I love the Yvonne Craig-inspired Burnside suit, but this suit is actually starting to grow on me especially since the last page in issue 36. What are your thoughts on this? 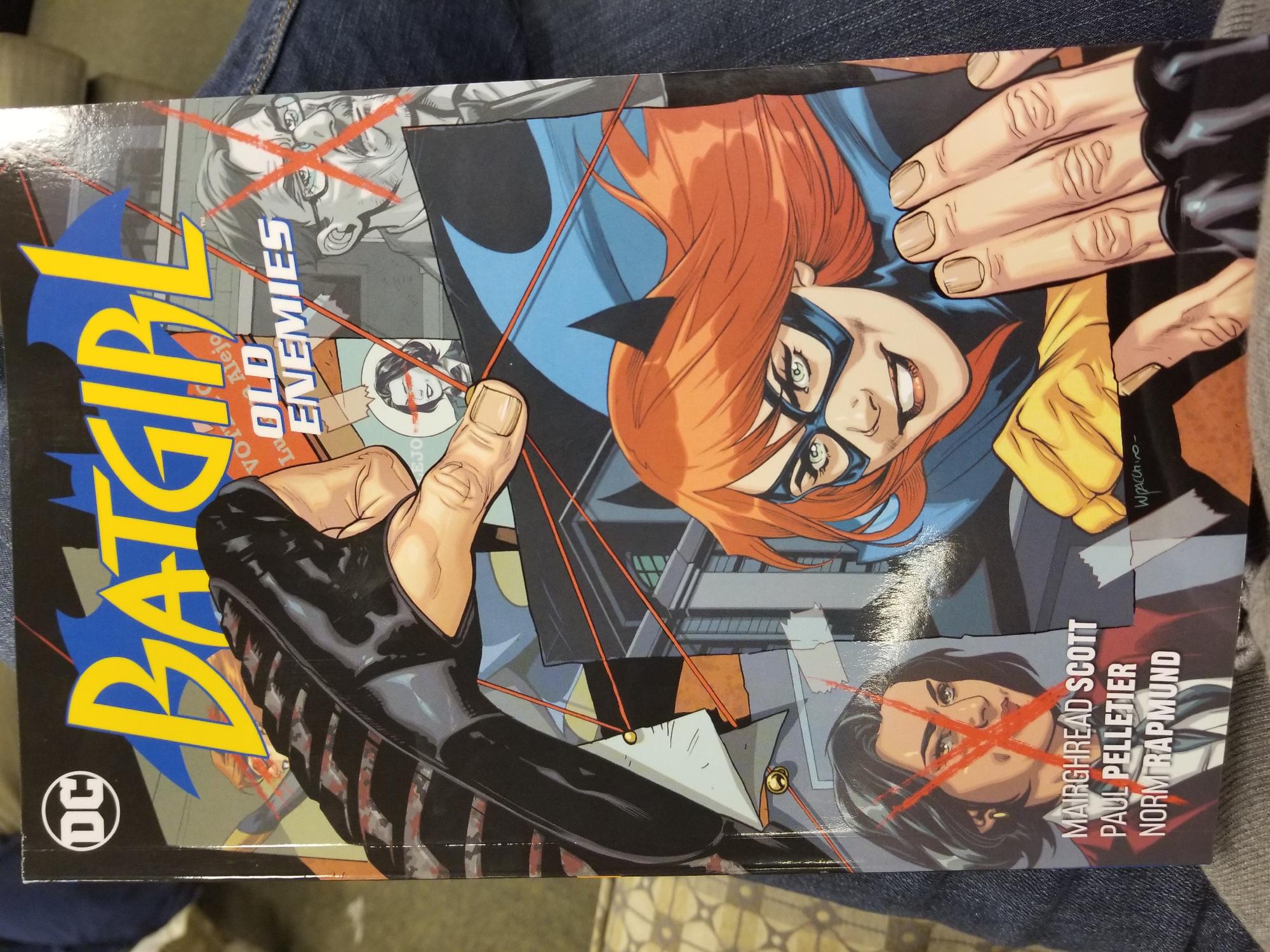 Who is your favorite comicbook couple? Hands down, these two are the best! They both make each other better and they are an amazing team. 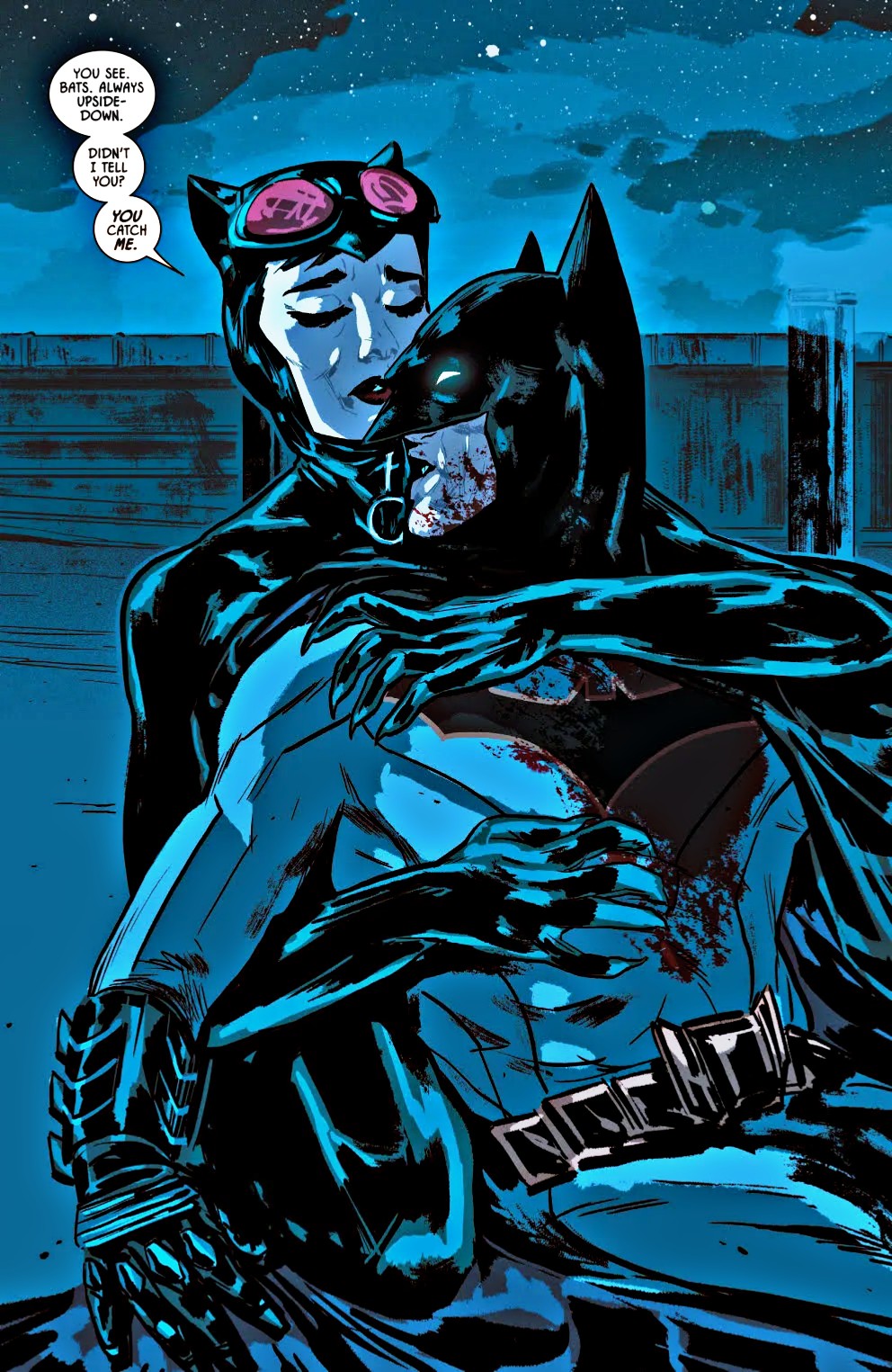 ***SPOILERS: IF YOU HAVEN'T WATCHED THIS EPISODE YET OR ARE UNABLE TO, IGNORE THIS BOARD BECAUSE SPOILERS LIE AHEAD.***

What did everyone think about the series premiere? I loved it a lot! The artwork is so beautiful, I love that they got Diedrich Bader to voice Batman again and there were so many funny parts in it. Kaley is a great voice actress for Harley Quinn, Alan Tudyk being a great Joker is no surprise because the man is just about talented in everything voiceover work or non-voiceover work and Lake Bell as Poison Ivy is top notch. I like that they made Gordon crazy in this series by him always having twitches. I think there was just too much swearing and I get that it's meant for adults, but I think they could dial it down a bit. For the verdict of the episode, I would give it a 9.7.

After watching Batman: Hush for the first time, this made me think that this was the worst DC Animated movie to ever come into existence. I would say there was about 30% similarity to the story in this movie, but the rest was all done in a different way. An example is Batgirl coming to Bruce's aid when he's unconscious and some thugs try to take off his mask. It should've been Huntress to come to his aid, but DC has been sleeping on her too much in the animation section. I know she's going to be featured in the Birds of Prey movie, but I still would've loved for her to be featured in this movie. Correct me if I'm wrong here, but was Bane ever involved in the storyline? It's been a while since I last read the story. The only things they got right for this movie were the opera scene and Superman saving Lois from falling off of the Daily Planet building. Nygma dropping the Riddler persona and becoming Hush was not really interesting. The only things I liked about this movie was the romance between Bruce and Selina because it shows that they are, in my opinion, the best DC couple and the voice cast as always is great. I loved Jennifer Morrison's performance as Catwoman. I would say she's my third favorite voiceover for the character after Grey Griffin and Laura Bailey. Fun fact, she is currently starring alongside ex-Green Arrow, Justin Hartley on This is Us. What are everyone's thoughts about this movie? I'm sorry for coming off mostly negative here. DC will always have a special place in my heart.

***SPOILERS: IF YOU HAVEN'T WATCHED THE SEASON FINALE YET OR ARE UNABLE TO, IGNORE THIS BOARD. SPOILERS WILL BE MENTION HERE.***

So what did everyone think about this season finale? I thought it was kind of disappointing. I didn't see Brion killing his uncle coming. I figured he would've knew better to not kill him since he was a hero for half a year and he learned so much from Dick and Conner. I also couldn't believe that Artemis knew Tara was working with Slade before they rescued her in the first half of the season. What I liked about the season was Jeff coming back as Black Lightning and becoming the new leader of the team. Another thing I liked about it was the tease with the Legion of Superheroes coming. In summary, this season finale made me hate Brion for good reasons and I'm looking forward to the next season. I thought we would've been getting Darkseid to be the main villain in the end of the season, but maybe he's being saved for the series finale just like he was in Justice League: Unlimited.

(edited by administrators)
A reply to Tom396
0

Yeah, I think that's a good idea. I'm thinking about doing one for episodes 19-22 since episodes 23-26 will come out on the same day.

***SPOILERS: IF YOU HAVEN'T WATCHED THIS EPISODE YET OR ARE UNABLE TO WATCH IT, INGNORE THIS BOARD. IT'S FULL OF SPOILERS.***

What was everyone's thoughts about this episode. I thought it was much better than the last. It's sad to know that Violet's healing ability is what's causing her to die. I like that they brought in Zatanna to take care of Klarion because hasn't been active much since her yearly talk with her dad. I like that they took out Klarion by taking him to the Tower of Fate because it means one less member of the Light taken care of. I didn't see the part with Harper being attracted to Violet coming. It's also sad to know that Joan is dead since we last saw her on a hospital bed. I think Artemis will be looking into Tara since she is suspicious about Tara's training which she learned from Slade. I never thought that the Outsiders would become much bigger than the Justice League. Anyways, I'm glad that this episode had a lot more action rather comedic references from different cartoons. These last few episodes have been lacking a lot of big Dick energy and I wish they would show more of him.