You don't need read Vol 1 (which is set in another continuity) and as far as I know, you don't need to read most of Vol 2.

As far as I know, the best regarded -or, at any rate, most important- Wonder Woman runs are Marston's original comics -I wouldn't recommend them to a beginner, though-, George Perez's reboot, and Gail Simone, Greg Rucka and... Phil Jimenez, I think? runs.

If you have other questions, @Tupka217 is the local go-to Wonder Woman expert.

Thank you and welcome.

I see this is a not-very-subtle undercover "DC sucks, Marvel rules" by a Marvel fanboy who doesn't even read Marvel.

It's funny, TS. Twenty years ago, I'd be agreeing with you. Nowadays, I find my younger self's fanboyism embarrassing.

Marvel heroes' motivations aren't more realistic than DC heroes' ones, and a lot heroes of both companies are driven by justice.

As for justice being a boring motivation... As someone who survived the 90s Image, I got fed up with anti-heroes fighting for money, self-interest or revenge long, long ago.

I have been a Marvel fan for nearly forty years. I still am, even if I don't care for current Marvel. .

That 21771 guy is a troll? I thought there were two similar names because some bug in the pinging system or something.

I'm sorry. I should have remembered that's an old troll trick. I'll be more careful from now on.

""Feats" is not a thing. Just because one thing happened under certain circumstances doesn't mean it will always happen under other circumstances."

You're SO right. It's annoying, specially because the same people who demand feats often ignore those which don't suppport their argument.

I'm not saying that's the topic starter's case. It's only a lot of fans do so.

Anyway... Sigh. I miss those times when Batman was a pulp "The Zorro meets Sherlock Holmes" detective solving crimes and having pulp adventures.

(edited by MektonZ)
A reply to Archangel Gavin
0

You're welcome. Sadly, a lot people forget about them. :(

I'm wondering about the age gap between what I'm going to call the Sidekick Trinity (not that Kara or Barbara were really sidekicks, but...). I know Kara graduated high-school in Action Comics #318 (1964) and graduated from Stanhope University in Adventure Comics 407 (1971); and Barbara was working as a librarian in 1967. Do you remember when Pre-Crisis Dick Grayson began university?

A reply to Emperor Spriggan556
3

I think it's a bad idea. The kind of story which uses to lead to a dead end followed by a retcon or reboot because it's usually a bad idea, a change for the change's sake cooked up by someone who is so eager to leave his mark on a franchise than he never thinks "What next?"

Exhibit A (and B, and C, and D...): Superman: Grounded. Superman: Truth. Spider-Man's own unmasking.

As for Superman's secret identity: a lot of writers have come up with ways to justifiy it throughout the ages (Superman can control his facial muscles to alter his features slightly, super-hypnotism, he uses robotical dopplegangers to divert suspicions, nobody knows he has a secret identity, Superman is the Earth's larger-than-life champion so that Clark Kent guy is obviously a mere lookalike...)

And fans have pointed out why is isn't unrealistic (there're plenty instances of people looking completely different via a makeover or different body language).

To be honest, I think this debate is a waste of time. Secret identities are an old convention of the genre. In real life, a full mask would protect your secret identity just as good as a pair of glasses. In other words, even Spider-Man would be outed wthin one month.

Super-hero comic-books are power fantasies created for children and supported by unrealistic conventions. Keep poking in the clay's feet, looking for structural flaws, and the whole skeleton will fall apart and crumble down. And then what you will fantasize about?

I'd like writers focusing efforts on writing better stories instead of wasting time looking to deconstruct or justify every tiny thing.

Why everyone believes they're the next Alan Moore is something I can't figure out.

Would you believe I was thinking the same thing?

A reply to Archangel Gavin
0

In my headcanon, Kara is a little older than the original Titans (or at least older than Dick) and something than Barbara. In other words, roughly the Pre-Crisis set-up (I don't like she was so much younger than Dick in Post-Crisis continuity)

"The thing is, Wonder Woman has had weaknesses, but they've been portrayed so inconsistently (and are, frankly, stupid) that people forget she has them."

In addition to the "losing powers if tied up by a man", Golden Age Amazons could be knocked out if you hit a spot in the nape of the neck, if I remember correctly.

Talking about dumb weaknesses, wasn't Power Girl weak to natural stuff for a while? I don't know who came up with that.

""teleport into the sun" is pretty much throwing the towel into the ring."

Yes, it's like everyone assume they'll get Kryptonite at hand to fight a Kryptonian with. Or a Supreme Nullifier will magically fall onto their laps if Galactus drops by. 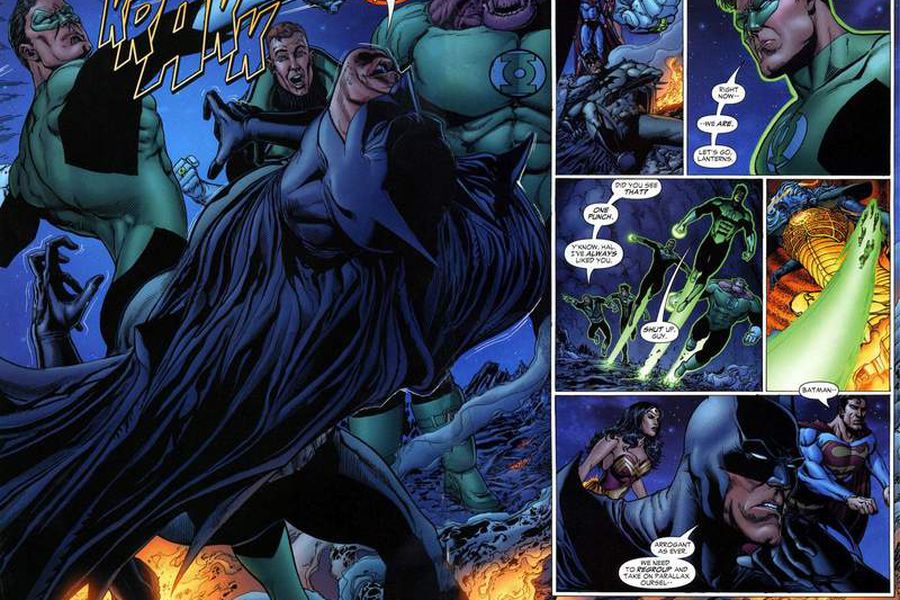 P.D.: I'm having problems with the image uploader today. I'm sorry for the inconvenience.

"Throne of Atlantis", where Batman is definitely not beating Aquaman. 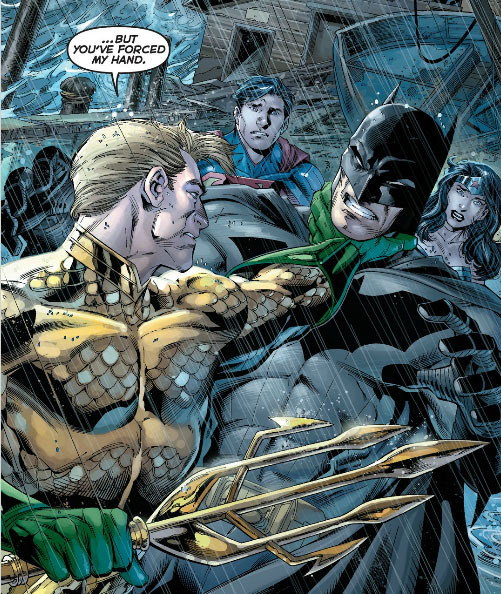 In "Sacrifice", Batman finds out what happens when Superman isn't holding back. Wow, that Kryptonite ring sure was useful. 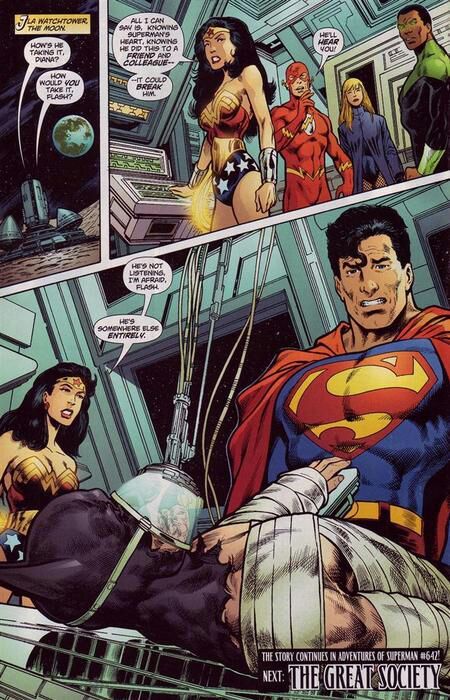 I uploaded THAT page from Hiketeia, but it has disappeared. 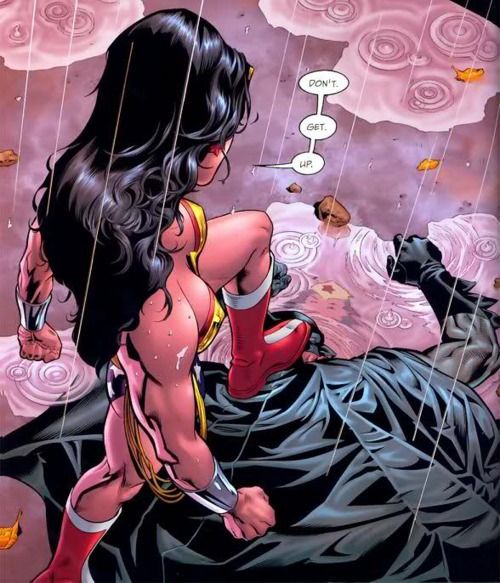 First of all, Flash isn't "weak" to close combat. Fighting hand-to-hand to someone who can punch you one million of times before you can even think of raising your fists is both dumb and suicidal. This is from "Identity Crisis" 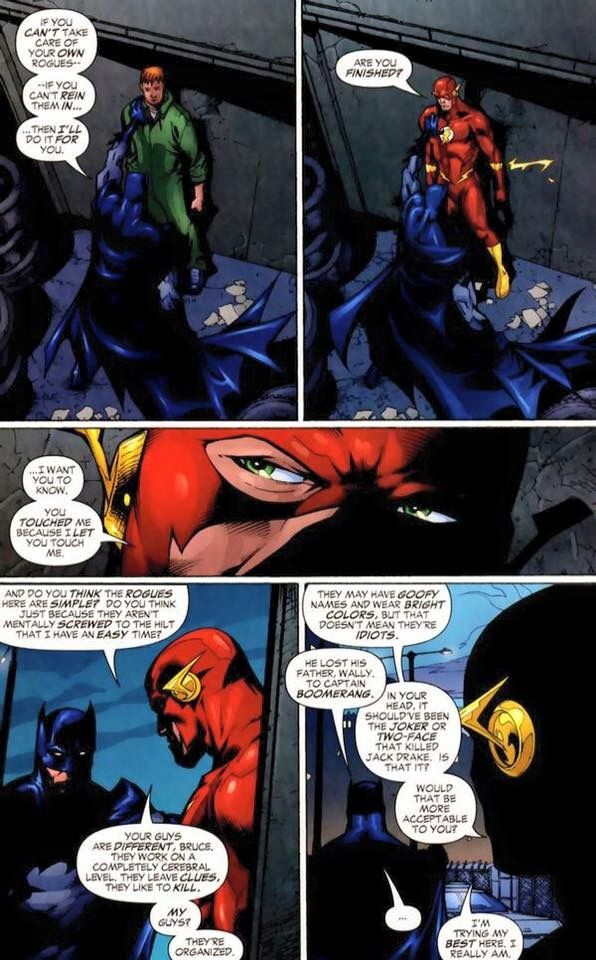 Second, Wonder Woman is super-strong, super-fast, night invulnerable, can fly and is arguably the world's best warrior. As seen in "Hiketeia"

Third, Cyborg is NOT a computer, and I don't get what it has to do with Batman fighting him.

Fourth, Superman has been fighting off Kryptonite-wielding enemies for decades. If you think "Kryptonite=automatic win", you're sorely mistaken.

Oh, and this picture of "Sacrifice" shows what happens to Batman when Superman isn't holding back due to mind-control:

Batman only survived because Wonder Woman arrived just in time.

Aquaman doesn't need water to survive. He lost that weakness forty years ago.

This is from "Throne of Atlantis"

And a GL picture as a bonus:

I thought Batman was supposed to be awesome because he's the world's greatest DETECTIVE, not because he can beat super-beings because <insert "preparation time" meme here>

What is with Batgod fans and their obsessive need to see -their fanfiction idea of- Batman mocking, putting down, humiliating and beating his own teammates? They don't realize that DC devaluates their remaining IPs with that garbage? Or maybe they don't care as long as they get their Frank Miller-spawned self-insert fantasy? Why are they always fantasizing about Batman beating Superman instead of fixing Gotham?

He's more interested in putting the "metas" in their "place" than in neutralizing his own Rogues.

At this point he should just shave his head.

But as things stand currently, we'll not be seeing the DCEU Justice League, let alone a base to be used by said League, in a new movie anytime soon.

Mxyzptlk is an extremely funny pain in the ass.

There're many continuities because every time the DC higher-ups think continuity has gotten too confusing, they half-reboot the universe... which, of course, compounds the problem.

- Though, in the 80s' some writers claimed the DC Multiverse was too complicated and confusing for new readers (I utterly disagree, but that's irrelevant), so in 1985 DC killed their Multiverse -during the Crisis on Infinity Earths story- and created a new continuity called New Earth. Though, it was only a half-reboot, which spawned many, many issues and continuity headaches, besides damaging or ruining many characters and splitting fanbases.

- New Earth (or Post-Crisis) was the main continuity from 1985 to 2011. Nonetheless, DC spent most of those years retconning and changing stuff to fix the issues caused by the reboot. Even so, it was still the same continuity.

- Finally, in 2011 they rebooted their universe again. Post-2011 (or Post-Flashpoint) continuity is called Prime Earth, but it is hard to get into because the reboot was a barely-cooked mess.

As others have said, it's better if you just read what you like and pay no attention to continuity. Personally I gave up on current comics a while ago, and I only read Pre-Crisis or New Earth stuff.