@Tupka217 okay fair enough. Also how do I pronounce your name?

Okay thats fair but I only chose Zack because

A reply to Tim Kozyra
1

@Tim Kozyra question how good is the Health Care?

Apparently 216 people hate Joel Schumacher and 59 people hate Zack Snyder I was one of the ones who thing Zack is worse.

Poor dead Joel is getting his *** kicked by nearly every fandom member here.

A reply to The Best of rap
1

For some reason they keep on giving Barry brown hair and not blonde hair like in the comics why?

A reply to The Best of rap
0

@BlueDaly @Sisu138 @The NEW Mask Batman Forever is good I mean, okay, it’s not Batman & Robin, and it’s meant to be lighter in tone, but it just seems confused on whether it wants to be a comedy like the Adam West show, a drama like the Burton movies, and thus, it turns out it doesn’t succeed in either. Granted, it does have a few good ideas and the visuals are still rather stunning in many respects, but it plays everything too safe, and that’s not how Batman should be handled. Batman should be different, memorable and inspired. This film is either annoyingly odd or boringly generic. If it didn’t have the "Batman" name on it, it’d probably be forgotten quickly as a superhero flick. It’s not the worst, but it’s not that good either. It’s a strange installment, but not that strange enough to leave that big of an impact

@The NEW Mask thank you and its okay.

@The NEW Mask a spoiler alert I mean some of us haven't seen the movie yet so please don't spoil it.

@Ffuiffuieiffuiffuie we do this occasionally. 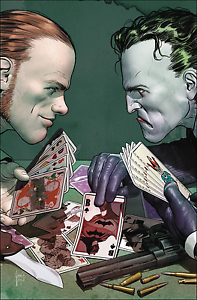 @Edward Nygma - The Riddler Riddle Me This and Riddle Me That: I am always around but unseen. I am often avoided but never outrun. I could find you at the end of the road or even the next corner. What am I?

@Ffuiffuieiffuiffuie I know thats why I defined it instead of spelling it.

An attic is a space found directly below the pitched roof of a house or other building; an attic may also be called a sky parlor or a garret