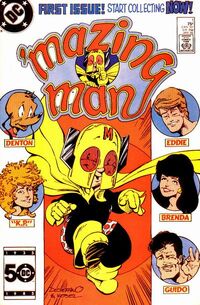 'Mazing Man depicts the misadventures of Siegfried Horatio Hunch III, a benignly deranged little man in Queens, New York who dresses in a homemade costume and performs deeds like unclogging drains and watching out for local children. Viewed as a kook by his neighbors, he saved a child from being hit by a truck in the first issue, earning him some respect and notoriety, not to mention a steady stream of appreciation (and food) from the mother in subsequent issues.

Retrieved from "https://dc.fandom.com/wiki/%27Mazing_Man_Vol_1?oldid=1529168"
Community content is available under CC-BY-SA unless otherwise noted.