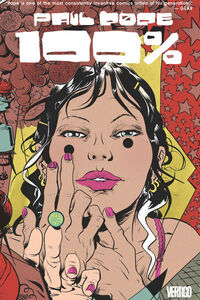 100% is a black-and-white comic book with gray tones written and drawn by Paul Pope. It was published by DC Comics' Vertigo imprint in five issues between 2002 and 2003, then collected as a trade paperback in 2005.

The plot concerns six main characters in Manhattan, New York City in January, 2038. Though the interweaving stories are romantic in nature, they are steeped in science fiction and cyberpunk environments.

Retrieved from "https://dc.fandom.com/wiki/100%25_Vol_1?oldid=281046"
Community content is available under CC-BY-SA unless otherwise noted.