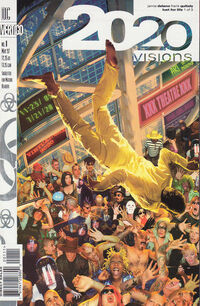 2020 Visions (sometimes called 20/20 Visions) is a science-fiction comic book written by Jamie Delano and drawn by four artists. Originally serialized as a twelve-issue full-color limited series from 1997 to 1998 at the Vertigo imprint of DC Comics, it was later collected as a black-and-white trade paperback in a 2004 hardcover from Cyberosia Publishing (ISBN 0-9742713-4-9) and a 2005 softcover from Speakeasy Comics (ISBN 0-9737039-9-7).

The series was four different stories of three issues each, each having its own artist, and each blending a different genre with prospective science-fiction:

Taking all place in the future world of the year 2020, the four stories were loosely connected by a genetic relationship between the main protagonist of each tale.

Publishers Weekly described the story as "William Burroughs-influenced squalor and grotesquerie [...] There are plenty of clever ideas here."

Retrieved from "https://dc.fandom.com/wiki/2020_Visions_Vol_1?oldid=1641966"
Community content is available under CC-BY-SA unless otherwise noted.