Start a Wiki
This page contains information about 52 (Volume 1) . 52 is a weekly, 52-issue series chronicling the events taking place between Infinite Crisis and One Year Later. It is written by Mark Waid, Geoff Johns, Greg Rucka, and Grant Morrison and edited by
52 Vol 1 (2006-2007) 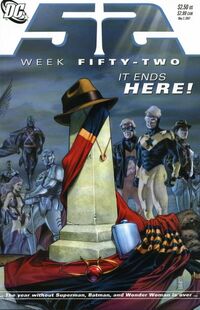 52 is a weekly, 52-issue series chronicling the events taking place between Infinite Crisis and One Year Later. It is written by Mark Waid, Geoff Johns, Greg Rucka, and Grant Morrison and edited by Stephen Wacker. J.G. Jones provides the illustrations for all fifty two covers.

For an overview of the major plot elements, see 52.

Contributing to the title was the writing team of Geoff Johns, Grant Morrison, Greg Rucka and Mark Waid. Editing the series was Jann Jones, Jeanine Schaefer, Harvey Richards, Michael Siglain and Stephen Wacker. J.G. Jones and Alex Sinclair provided the cover art for all fifty two issues. Issues #2-11 contained a backup feature entitled, "The History of the DCU." Seen through the eyes of Donna Troy, the feature provided a snapshot history lesson of all the major events that transpired within the DC Universe. After issue #11, the title featured two-page origin spotlights, written by Mark Waid, with edits by Jeanine Schaefer, Ivan Cohen and Eddie Berganza.

Initially, the purpose of the title was to fill in the missing gaps of time between Infinite Crisis and the One Year Later event. The focus of the title changed midway through publication, centering less on the chronology of the DCU, and more on the singular stories of the title's focus characters.

According to DC's senior editor Dan DiDio, 52 sought to take B-list characters and elevate them to A-list status. Some of the primary cast members involved in the series included: Adam Strange, Animal Man, Black Adam, Booster Gold, the Elongated Man, the Question, Renée Montoya and Starfire. Along the way, brand new characters were introduced, not all of whom survived the duration of the series. The series also saw the demise of two longstanding heroes of the DCU, the Elongated Man and the Question.

One of the storytelling conventions used for 52 was to view the DC Universe without the presence of the "Big Three," Superman, Batman and Wonder Woman. Their year-long heroic hiatus was directly tied to events that took place during Infinite Crisis.

In Infinite Crisis #7, Superman exposed himself to a massive dose of red solar radiation in order to defeat Superboy-Prime. As a result, his Kryptonian powers disappeared, seemingly forever. Superman spent the next year of his life as the mortal Clark Kent, and committed himself 100 percent to his job and his wife, Lois Lane. His powers did not return until shortly after the One Year Later event in a storyline titled "Up, Up, and Away."

Also in Infinite Crisis #7, Batman witnessed Alexander Luthor preparing to kill Nightwing. In a moment of rage and desperation, Batman pulled a gun on Luthor, an act that goes against everything the Dark Knight believes. Although Nightwing's life was spared, Batman realized that he had once again crossed the line. He embarked upon a personal journey of self-exploration in an effort to "kill the bat." His quest took him to Nanda Parbat, where he engaged in a ritual known as the Thörgal Ordeal, a spiritual rite that strengthened his resolve. Bruce Wayne emerged from the ordeal with a stable, conscious and healthy mind.

One of the keystroke events that precipitated Infinite Crisis was the death of Checkmate's Black King, Maxwell Lord, in Wonder Woman (Volume 2) #219. Max had used his telepathic powers to take control of Superman, turning him into his own personal instrument of destruction. In order to stop him, Wonder Woman snapped Lord's neck, killing him. This single act earned her great enmity from the super-hero community, and was a violation of their most stalwart credo: Heroes don't kill. Like Bruce Wayne, Diana retired from her heroic identity and spent the following year coming to terms with her actions. She eventually decided to serve humanity as an espionage agent. Bruce Wayne provided her with the cover identity of Diana Prince, and she began working for the Department of Metahuman Affairs.

Retrieved from "https://dc.fandom.com/wiki/52_Vol_1?oldid=2741635"
Community content is available under CC-BY-SA unless otherwise noted.