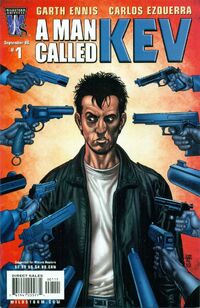 A Man Called Kev (Volume 1) was a limited series published by WildStorm Productions between 2006 and 2007. Written by Garth Ennis with art by Carlos Ezquerra, it is the third miniseries about former SAS operative Kevin Hawkins, following the events of The Authority: The Magnificent Kevin (Volume 1).

Back to Comics Contents : Comics A : A Man Called Kev Vol 1

Retrieved from "https://dc.fandom.com/wiki/A_Man_Called_Kev_Vol_1?oldid=1908368"
Community content is available under CC-BY-SA unless otherwise noted.