Speak - Or do I sew you in the skin of a pig and send you to Allah? Abdul Ibn Bey

Ali Bey's Arabian tribe was friendly with the British military, and other Arabian tribes in the same region were friendly with the Axis, and yet others wanted all of the foreigners gone. Wide open tracts of desert and other wilderness made the region a vast haven for outlaws, bandit gangs, revolutionary movements, and religious fanatics. Sheik Abdul lived in dangerous times, and that was before the Second World War even got started.

His dour manservant and closest friend, Hasan the Turk, accompanied Abdul on almost all of his adventures. Hasan was a crack pilot, a superb marksman, and a truly deadly hand-to-hand fighter.

Sheik Abdul inherited Sheik Ali Bey's authority and responsibilities at age twenty-two, when the elder Sheik was killed in battle.[1] 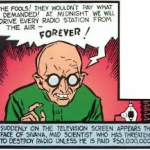