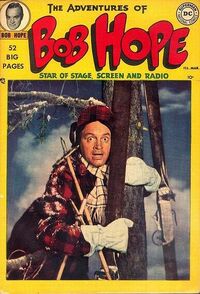 The Adventures of Bob Hope was an ongoing comic book series featuring a fictional version of comedian/actor Bob Hope, based mainly on the "cowardly wiseguy" character he played (under different names) in most of his film appearances.

Back to Comics Contents : Comics A : Adventures of Bob Hope Vol 1

Retrieved from "https://dc.fandom.com/wiki/Adventures_of_Bob_Hope_Vol_1?oldid=2742051"
Community content is available under CC-BY-SA unless otherwise noted.