Alanna Lewis-Strange is a half-Human half-Rannian grad student in anthropology, assistant and wife to Adam Strange, and member of the Justice League United.

Alanna was born from the human Anna Lewis, and the Rannian scientist Sardath, who had come to Earth for a scientific study of the human genome, only to fall in love with a collage grad student. However, this act caused the investigation to be shut down, and Sardath was taken back to Rann by order of the Thought Council.[1]

Thirty years later, Alanna become romantically involved with the anthropologist Adam Strange. One day, during a dig of a strange skeleton in Northern Ontario, Alanna was teleported away to a space prison, alongside other aliens, including Hawkman, by the Thanagarian criminal Byth Rok, to use their DNA to create Ultra the Multi-Alien, Slayer of Worlds.[2] After making an attemp to escape, Alanna, alongside the other prisoners are rescued by the Justice League United, before being teleported back to Rann using the Zeta-Beam, however Alanna and Adam are trapped in an energy feedback loop, which causes them to randomly switch places.[3] 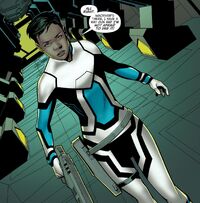 Alanna was sent back to Earth by Sardath, where, after donning a Rann armor, meets a girl named Heather, who asked for her help as her friend Miiyahbin had been taken by a creature known as the Whitago. They find Miyahbin, who revealed that she is a super-heroine known as Equinox, and used her powers to destroy the creature.[4] After reuniting the JLU, who had decided to take the alien child Ultra with them, Alanna introduced them to Miiyahbin and explained what happened. After Green Arrow received a signal from Hawkman, who was believed to be dead, the team splits up once again, with Alanna taking Miiyahbin to her grandmother while the rest of the team would investigate the signal. Miiyahbin's grandmother explained to them the history of Midayos and the Whitago, who had fought since the dawn of creation. Revealing that the Whitago they attacked was Miiyahbin's father, Alanna returned to the cave with Equinox, who used her power to drive away the spirit.[5]

Shortly after, the JLU Mon-El of the Legion of Super-Heroes, who claimed that if Ultra is not destroyed the Legion would die. The League refused to hand Ultra to them and a fight erupted between the two teams, but they were stopped by Brainiac 5, who explained them that Ultra was destined to become the world consuming entity known as Infinitus. The Legion offers the League a deal to determine how exactly Ultra becomes Infinitus, and work together to prevent it, but, if they do not succeed they will have to destroy him at any cost.[6] However, before they are able to do anything, the heroes are attacked by The Cadre, who where sent by Bith Rok to get the kid. Ultra is taken to Byth Rok, who uses his power to open a rift in reality to bring forth the Infinity Wraiths and begin the process that will see Ultra become Infinitus.[7]

The League and the Legion, now joined by the Legion Lost, head to the Moon of Ryngor to stop Byth, but unfortunately, they are too late and Ultra is transformed into Infinitus, with Byth controlling him, as time and space beging to collapse.[8] With no other option, J'onn is forced to take Ultra's mind, destroying Infinitus in the process. Unfortunately, Brainiac 5 had already launched a bomb destroy Infinitus, but without him to absorb the payload, the bomb opens a black hole, threatening to consume the heroes and Thanagar.[9] With the help of White Witch, Brainiac 5 and Sardath use the Zeta-Bean to move everyone away from the hole including the planet. After the crisis is adverted, The Legion returns to the 31th Century, taking Ultra with them. Before leaving, Brainiac fixes the feedback loop, allowing Alanna and Adam to be reunited once again.[10] 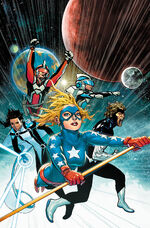 Some time after, Alanna and Adam where summoned to Rann by Sardath. He explained that after the JLU and Legion saved Thanagar from the black hole they inadvertently created what the Council of Thought knows as "breakers", spatial anomalies that distort and prevent physic while trying to integrate in the universe. Those breakers followed them to earth through the Zeta trail caused by their last teleport and have disperse on the planet. The JLA detected the first breakers to Connecticut, and proceded to investigate a mysterious old house, where they are greeted by it's owner, and they discover that the rooms are gateways to the past. Being tricked by Sardath, Adam decides to sacrifice himself to destroy the breaker by using his Zeta-transporter inside of it, entering on a permanent zeta-phase state in the process, saving Alanna from this very fate.[11]

Alanna manage to make contact with her husband. He explained to her that they could have stopped the breaker without entering into Zeta, having they the right individuals. This lead to League to expanded their roster, recruiting both heroes and villains alike to help them to deal with the breakers.[12] Some months later, Alanna and the League returned to Rann and confronted Sardath about her true parentage, which she discovered on the House of Secrets, and that he tricked Adam into sacrificing himself, also using him as his test subject. Yet, Alanna discovers that there is a way to bring Adam back, to which Sardath reluctantly accepts. After rescuing him from the Zeta Beam, Alanna embraces and kisses her husband.[13]

Some time after the dissolution of the Justice League United, Alanna moved to Ranagar and became member of the Thought Council like her father, while her husband, on the other hand, stayed on earth. One day, while trying to bring Adam to Rann, the city was attacked by Thanagarians forces.[14] After Adam is teleported to Rann by Cyborg, he reunites with his wife, who tells him that Sardath was killed during the incident. Fueled with rage due the death of her father, Alanna tells Adam that she and the Council are planning to counterattack the Thanagarians. However, Adam is not sure that the they were the true responsibles behind the attacks, as he discovered from a security footage from Sardath's lab that a mysterious wingless figure was the one interfering with the Zeta Beam. Yet Alanna is not convinced by the evidence, accusing her husband of sympathizing with the enemy because of his previous partnership with Hawkman, and reiterates that she saw the Thanagarians with her own eyes. Adam agrees with his wife and tells her that he will join her and the Council in short, but actually he sneaks away and uses the Zeta Beam to travel to Thanagar to talk with Katar.[15]

After Strange escapes to Thanagar, the Council begins to doubt about Alanna's loyalty, but she claims that her husband's love for her is stronger than his comradeship with Hawkman. After she fails in contacting him, the Council reaffirms his suspicious about Adam working with the enemy, to which Alanna responds that if her husband is a traitor she will execute him herself. After a failed conference call with the Thanagar council, Alanna declares Adam and Hawkman as enemies and puts a bounty on their heads.[16] After appearing in a Rannian talk show, Alanna is contacted by Adam who tries to explain to her the truth behind the attacks, yet she refuses to listen, demanding him to turn himself and Katar in. Adam agrees to return to Rann with the intention to talk, but something is interfering with the Zeta Beam.[17] 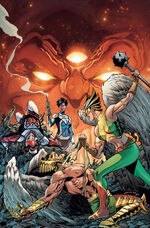 Following the destruction Ryngor, one of Thanagar's moon, by Despero (who was also behind the attacks on Rann), which severely damages the planet's cities, Alanna orders the Rann forces to prepare for their counter-attack against the Thanagarians. Unbeknownst to them, she has been under Despero's influence since the attack on her father's lab. Adam makes contacts again, informing her and the Council that he and Hawkman are returning to Rann, to bring to justice the true culprit, but Alanna orders the forces to open fire on them. The two of them manage to escape just in time, but Despero, whose powers has now increased, send great part of Rann's population after the heroes. He also makes Alanna to order an air attack on them, heavily destroying the city.[18] Adam and Katar, alongside Hol's partner Rayn reach Despero's base. During the fight, Adam discovers that Sardath is alive and that he has been controlled by Despero in order to construct a portal to Earth. Adam destroys the crystal that powered the devise, destroying the machine and killing Despero Hawkman and Strange in the process. After the conflict ended, Rann and Thanagar sing a peace treaty, becoming allies. Later Alanna and her father unveil a monument made to honor the heroes, with Sardath claiming that Strange always saw the best on people. Unbeknownst to them, Adam survived the explosion but was sent into another universe.[19][20]

Subsequently, Adam manages to return to his home universe and reunites with his wife.[21] Some time later, Alanna gives birth to a daughter, who they named Aleea.[22] She however died when the Pykkt Empire attacked the Rannians.[23]

Retrieved from "https://dc.fandom.com/wiki/Alanna_Lewis_(Prime_Earth)?oldid=2767449"
Community content is available under CC-BY-SA unless otherwise noted.