House Manager for Bruce Wayne and Caretaker of Wayne Manor

You may call me Alfred without the "mister"-- and it's I who will do for you! You see, I'm your new butler!

Alfred Beagle was born as the son of Jarvis Beagle, a retired military agent who had proved to be less than apt as his father though a competent military officer.[citation needed] Following the service of the First World War, Beagle followed the deathbed request of his father who used to be a butler for the Wayne family. Alfred sought out Wayne to fulfill his father's last request and upon arriving to Gotham City, Alfred introduced himself to Bruce Wayne and Dick Grayson at Wayne Manor and insisted on becoming their butler.[1]

Originally the pair did not want to jeopardize their secret identities with a servant in the house, they did not reject him outright. However as fate would have it, Beagle stumbled onto the Batcave and deduced his master's secret identities. Alfred would later rescue the dynamic duo from a trap and aided them to capture the criminals responsible. Alfred's sense of responsibility and his knowledge of their secret identities convinced Bruce Wayne that he could be depended on to keep their secrets and manage the day to day operations of Wayne Manor. Since then, Alfred became Bruce Wayne's butler and Batman's assistant.[1]

On his role, Alfred would always think about Bruce and Dick's well-being, often suggesting them to take a well-deserved rest.[2]

Alfred assisted the dynamic duo on several occasions; some of the most notable ones being the capture of the Robber Baron[3] his assistance on capturing the criminals Tweedledum and Tweedledee[4] as well as a large criminal gang[5] and his help uncovering the fraud organized by George Grayson.[6] However, Alfred's assistance was always accidental and more often than not, he had to be saved by the dynamic duo.[7] 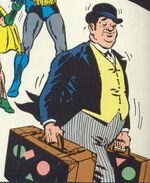 As he became part of Batman and Robin's adventures, Alfred decided to get in shape and start exercising. Bruce noticed Alfred's hard work and allowed him to go on vacation. Alfred spent his vacation on a health resort, where he worked extremely hard to become a more fit person. Upon his return to Gotham, Alfred had lost weight and was no longer stout, but instead he was a slender and thin man and he also grew a fine line of mustache.[8]

With his new appearance, Alfred was once asked to play the role of an important British Lord, who didn't want to be recognized in public. Using his acting background, Alfred played the role perfectly, but he attracted the attention of some criminals, who were after the real Lord. Batman and Robin saved Alfred from harm and captured the criminal gang.[9]

Alfred's New Look
Shortly after, Alfred fell in love with a woman called Belinda and he tried to court her by revealing his connections to Batman. As a prove, Alfred disguised as Batman and tried to win Belinda's heart. However, Belinda was actually Catwoman and Alfred fell for her trap. He was rescued by the real Batman and Robin and after Catwoman's gang was captured, Alfred punished her himself, leaving her unable to sit for a short time.[10]

Following his desire to become a detective, Alfred actively participated on some of Batman's cases and he also started honing his skills whenever he got the opportunity. However, his meddling in minor criminal activities and his deliberate investigations often placed him in trouble, but he always managed to overcome the odds by sheer luck.[10][11] Sometime Alfred's attempts at real investigation were a complete success, but despite capturing the criminals entirely by himself, his employers still doubted of the veracity of his feats.[12]

Later, Batman was summoned to England to solve a case and Alfred was more than happy to visit his homeland. Alfred's presence proved to be an inconvenience at first, after he was captured by some criminals, but later he redeemed himself by saving Batman from a certain death.[13] Some time later, Alfred helped stage the apparent death of Bruce Wayne, but unfortunately he was blamed for the murder. Alfred was sent to prison, but thanks to Batman's efforts, his name was cleared and he was exonerated.[14]

Alfred was suddenly fired by Bruce Wayne and with no place to go, Alfred went to the place of a man called Willie Willis, not knowing that Willis was a wanted criminal. When Willis asked Alfred to tell if he was Batman's butler, Alfred stuck to the truth and didn't reveal his connection. Willis was later captured by Batman and Alfred was hired again.[15]

One time, Alfred was cleaning the Batcave when he decided to try one of the Batsuits and he was accidentally struck in the head, which caused a temporal amnesia in him. When he recovered, he thought he was Batman and started acting as such. Bruce and Dick allowed this impersonation to prevent further damage to his memory. Posing as Batman, Alfred solved a few cases, always with the help of Bruce and Dick. During an undercover mission, in which Alfred's role was that of a butler, he was struck in the head once again and his memory was finally restored.[16]

Alfred's dedication and reliability and amount of dedicated army field medic and intelligence skills have proven invaluable to Wayne and Grayson and the later expanded members of the Batman Family including Selina Kyle Wayne and Helena Wayne. Following Bruce Wayne's death and that of his wife, and the departure of Helena Wayne and Dick Grayson, Alfred remained as caretaker of Wayne Manor and the Batcave beneath well into his old age.

Retrieved from "https://dc.fandom.com/wiki/Alfred_Beagle_(Earth-Two)?oldid=2675704"
Community content is available under CC-BY-SA unless otherwise noted.