Alfred Pennyworth was the loyal butler to the Wayne family. After the Waynes' tragic demise at the hands of an armed mugger, Alfred continued to raise young Bruce who later became the vigilante Batman.

Alfred Pennyworth considered himself to be a rebellious teenager, having run away from his home in London numerous times. He was never close to his father, who was a butler for the Wayne Family overseas.

When Alfred was 18 years old, he joined the British army and had a daughter. However, eventually, he got discharged and quit being an soldier.

Alfred would then met Briar, who led an ancient Celtic organization absorbed by MI-5 known as Nemesis Program. Alfred was trained to be the new Dark Knight, a title originally held by Gaweyne de Weyne. Alfred soon discovered that Briar had in fact gone crazy after the death of his son, and Alfred was forced to seemingly kill him. However, Briar would actually survive and use a sample of Alfred's blood to secretly create a clone of him.

Alfred returned to London and began a stage-acting career, where he quickly rose in prominence and performed at the Globe Theatre.[3] However, during his time here, he received the news of his father's death under mysterious circumstances. Though Jarvis Pennyworth had attempted to write a letter dissuading his son from taking his place at Wayne Manor, he was never able to deliver the letter, and Alfred dutifully accepted his father's vacant position in Gotham City.

Alfred relocated to the United States and became the Wayne's butler when their son Bruce was four years old.

A few years later, when Bruce was 10, Thomas and Martha Wayne were tragically shot in an alley by a mugger. Alfred rushed to the crime scene as soon as he heard the news and took Bruce home, taking on the responsibilities as the boy's legal guardian as he aged.

Bruce would handle the death of his parents very harshly, making him a handful for Alfred to raise by himself. Bruce would search for answers about his parents' murderer relentlessly. While researching the fabled Court of Owls and their possible connection, Bruce would become trapped in an abandoned building for days, forcing Alfred to feverishly track him down before the boy succumbed to dehydration.[4]

Bruce's determination wouldn't stop there though, and he developed a fascination with guns and killing the man who murdered his parents. As a last resort, Alfred was forced to send him to an Arkham rehabilitation home for boys upstate for a time until he was comfortable to return.

Though raising him was difficult at times, Alfred and Bruce developed a deep bond and appreciation for one another.

When Bruce was 18 years old, he disappeared in order to travel around the world and train to fight crime, leaving Alfred in charge of Wayne Manor. Alfred was disappointed in Bruce's decision and tried to contact him during the years he was away.

One of Alfred's messages finally reached Bruce in a remote location in Norway when he was 24 in the form of a phone call. Though Alfred begged Bruce to come home on his side of the transceiver, Bruce couldn't bring himself to answer.[5]

When Bruce was 25 years old, he finally returned to Gotham to Alfred's delight. Bruce had made the decision to become a vigilante, eventually choosing to take the form of a bat, which Alfred hesitantly agreed to aid with.

Around 5 years later, Batman began investigating a murder that seemed to be linked to the nursery rhyme about the mysterious Court of Owls. Alfred, from the Batcave, provided assistance, but, during his adventure, Batman was kidnapped by the Court's Talon and kept in their underground labyrinth for days.

When Bruce finally escaped the Court's clutches, Alfred discovered him, dehydrated, starving and revived with a car battery as he staggered to the Batcave's secret entrance.

They were not able to rest for long as the Court of Owls launched a crusade against Gotham, sending all their revived Talons to assassinate Gotham's leaders to regain order over their city. The Court, knowing Batman was Bruce Wayne, sent multiple Talons to Wayne Manor, and Bruce and Alfred were forced to retreat to the Batcave. From the cave's security bunker, as Talon's tried to break it, Alfred put out a distress call to all of the Bat's allies to assist in stopping the assassins across the city. Many, but not all, were captured, and Alfred survived the Talons that were after him by exploiting their weakness to the cold and lowering the Batcave's temperature to below freezing from his spot in the bunker.

When the night was over, Batman went after the Court of Owls but only discovered many of their corpses, having seemingly drank poison as a mass suicide. Upon regrouping, Alfred offered that perhaps this lack of conclusion was the conclusion, but he was proven wrong when Lincoln March revealed that he killed the Court and that he believed himself to be Bruce Wayne's long lost brother.

Death of the Family

When the Joker returned to Gotham after a yearlong absence wearing his own face as a mask, he initiated a plan to take out all of Batman's allies to return to a simpler time when it was just Batman vs. Joker.

Among his first attacks, Joker went to Wayne Manor and ambushed Alfred, beating him senseless with a hammer before abducting him for a "party" he was throwing. In a recording he left at the scene, Joker claimed to have blinded Alfred with chemicals directly to the eyes.

Though the Joker claimed to know the entire Bat family's secret identities, Batman believed it was a bluff and that Joker had only targeted Alfred due to his publicity as Bruce Wayne's butler and connection to Batman Incorporated.

After the Joker defeated and kidnapped the rest of the Bat family, he brought Batman to his "party", where he revealed Alfred was not actually blinded but had been Jokerized with Joker Venom. As Batman broke free from his constraints and defeated the Joker - discovering that the claim about their identities was a bluff - Alfred forcibly overcame his Jokerization and tried to keep the family together as they themselves succumbed to the Joker Gas. When Batman returned to them, he was able to properly cure them, and Alfred returned to Wayne Manor, though a wedge had been placed within the Bat family from the whole ordeal.

As a mysterious malefactor orchestrated a yearlong attack against Batman, Alfred aided from the Batcave. To his surprise, his adult daughter Julia Pennyworth surfaced in Gotham, eager to meet her father and aiding Batman's quest for justice. However, upon working with Batman on a mission to Hong Kong, Julia was badly injured, and Alfred nursed his daughter back to health from the Batcave.

However, the conspiracy against Batman went deeper than expected, as the villain Hush, revealing himself to be a sub-conspirator, infiltrated Wayne Manor and injected Alfred with the Scarecrow's Fear Toxin.[6] Then, in his secret identity as Dr. Thomas Elliot, Hush had Alfred condemned to Arkham Asylum for the mental strain he himself caused as another attack on the Bat family. 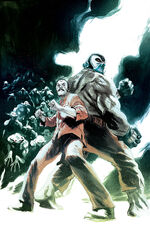 Though Alfred was detained in Arkham, the villains there were working on their end of the conspiracy, trying to resurrect the villain Deacon Blackfire with magic. However, due to the resurrection clashing with the Spectre under the asylum, the building was sucked into a magical whirlpool and destroyed, with inmates fleeing en masse to escape death.

Alfred managed to survive the disaster and actually partnered with the villain Bane to escape the wreckage. Though they worked good together, when Alfred and Bane finally arrived at a remote Batcave location that Alfred could use to signal for help, he betrayed Bane and activated the location's defense system to knock him out so as not to reveal his true connection with Batman.

Gotham continued to get worse and worse until Batman and his allies finally gained control of the city and defeated the man behind it all.

When the Joker came out of hiding yet again, having pretended to be the Arkham doctor Eric Border for a year, he had decided to initiate one final fight with Batman to finally end their conflict.

Having known his secret identity for some time and finally deciding to use it, the Joker attacked Bruce's most sensitive weakness and even managed to infiltrate the Batcave. Though Alfred tried to fend the madman off with a shotgun, the Joker was able to heal from the blasts due to the Dionesium in his spine and counterattacked by chopping off Alfred's right hand with a meat clever.[7]

Batman managed to defeat the Joker, but the two perished together in the caves beneath Gotham. The city celebrated the life of Batman and attempted to heal from the attack but, even two weeks later, Alfred couldn't accept Bruce's death and refused to have his hand reattached in the hospital, saying there was nobody to mend anymore.[8]

However, Bruce was resurrected by a small pool of Dionesium, that revived him without his memories of being Batman. Upon seeing Bruce again, Alfred was overjoyed and took advantage of the opportunity for Bruce to live a normal life without the stress of his parents' murder or the burden of being Batman. Whenever anyone from the Bat family or Justice League would try to reintroduce Bruce to his old life, Alfred would shoo them off, determined to let Bruce live the life he deserved. Besides, there was a new Batman that filled the mantle.[9]

Alfred's charade couldn't go on forever though as Bruce discovered more and more clues about his past life, even discovering the Batcave. Bruce decided that Gotham needed him as Batman again and used a machine he had previously built to give him all his old memories of being Batman again against Alfred's wishes.[10] Bruce returned to the role, and Alfred, disappointingly, returned to Bruce's side as his Penny-One.

Alfred was grafted a new right hand using advanced medical technologies in order to return to the status quo.[11] 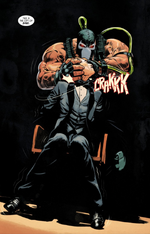 Alfred is killed by Bane

After a months-long campaign against Batman orchestrated by Bane and an alternate-reality version of Thomas Wayne, Bane had gained control of Gotham City and turned it into a city of Bane. Bane took Alfred as a hostage, having known Batman's secret identity, and threatened the Bat family to stay away.

Robin, not content with letting Bane have the victory, infiltrated the city and tried to take Bane down himself but was himself captured. Bane, making good on his threat, snapped Alfred's neck, killing him.

Though Batman had incorrectly assumed that Alfred had already escaped Bane's clutches before Robin made his assault, he later found out of Alfred's demise and was crushed by the loss of his father figure.[12]

When Superman publicly revealed his identity, the Joker decided to go to a war with Batman and finally end their rivalry.

Having relearned Batman's secret identity, the Joker dug up Alfred's corpse and, using the Designer's special cadaver formula, revived Alfred's body into a zombie-like state. Joker then forced the living-corpse to do his bidding as another psychological weapon against Batman.

The plan worked as he hoped, and the Joker was able to repeatedly wound Bruce during their climactic fight, as the latter was distracted by the corpse berating him for letting him die.[13]

Harley Quinn, joining the fight, distracted Joker long enough to strap bombs to Joker and herself. As Batman rushed to save Harley, the Ace Chemicals building exploded, and Alfred's corpse ceased functioning again.

Alfred was reburied by Bruce and the Bat-Family when the fight was over.[13]

Retrieved from "https://dc.fandom.com/wiki/Alfred_Pennyworth_(Prime_Earth)?oldid=2840783"
Community content is available under CC-BY-SA unless otherwise noted.