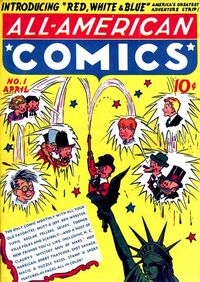 All-American Comics was an anthology book, with five or more features per issue. It is most famous for introducing the Golden Age versions of both Green Lantern and the Atom. Other mainstay features included Doctor Mid-Nite, Hop Harrigan, Mutt and Jeff (reprinted from the popular newspaper comic strip), Sargon the Sorcerer, and Scribbly (whose stories also featured the original Red Tornado).

After a span of 102 issues, the title was changed to All-American Western (Volume 1) and the content shifted decisively from superheroes to western tales in 1948. This continued until 1952, when the title (and content) was once again changed, this time to All-American Men of War (Volume 1). The series continued publication under this title until 1966. In May 1999, the title was revived for a one-off issue as part of the JSA Returns fifth-week event.

Back to Comics Contents : Comics A : All-American Comics Vol 1

Retrieved from "https://dc.fandom.com/wiki/All-American_Comics_Vol_1?oldid=2294725"
Community content is available under CC-BY-SA unless otherwise noted.