This page contains information about All-Star Comics (Volume 1) . All-Star Comics was an anthology comic book series published from 1940 (cover date listed as "Summer") to 1951 ("February - March" issue) and then revived in the 1970s. It was an unusual publicati 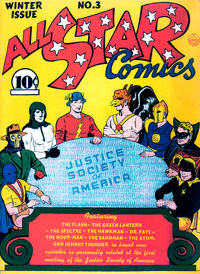 All-Star Comics was an anthology comic book series published from 1940 (cover date listed as "Summer") to 1951 ("February - March" issue) and then revived in the 1970s. It was an unusual publication in that it was originally published jointly by All-American Publications and National Periodical Publications. The series featured the most popular characters from both publishers' regular superhero anthology books. (The two companies would later merge and become what is now modern day DC Comics in 1946.)

“All Star Comics” (there was no hyphen originally) is chiefly famous for featuring the Justice Society of America (or JSA for short), the first superhero team, which debuted in the third issue (December 1940) and was the lead feature for the rest of the series’ run. Although the JSA adventures took up the bulk of each new issue, there would usually be at least one separate feature like "Hop Harrigan" as well.

In the eighth issue (January 1942), All Star introduced Wonder Woman in a solo adventure unconnected with the JSA story. Wonder Woman quickly became one of the most popular superheroes of all time and the issue featuring her debut adventure is an especially sought after collector’s item.

The publication schedule for “All Star” varied over time. For its first four issues, it was published on a quarterly schedule (with Summer, Fall, Winter and Spring issues). From issue #5 (July 1941) to #17 (June 1943), it was published bimonthly. It became a quarterly series again from #18 (September 1943) to #27 (December 1945), likely due to wartime paper shortages (which affected all print publications in the time period) rather than a drop in sales. For the 28th issue (April 1946), the series resumed a bimonthly schedule for the rest of its run.

As superheroes waned in popularity in the end of the Golden Age, All Star Comics changed its name to All Star Western. The JSA feature was replaced with cowboy heroes like Johnny Thunder (ironically, that was also the name of a longtime JSA member, although the cowboy character bore no relation to him).

In February 1976, the series was revived, once again featuring the JSA. The revived series ignored the “All Star Western” run entirely and re-started the series with a new issue #58. The June 1977 issue (#66) added a hyphen to the series’ name, making it officially “All-Star Comics”. It lasted until issue #74 (October 1978).

Back to Comics Contents : Comics A : All-Star Comics Vol 1

Retrieved from "https://dc.fandom.com/wiki/All-Star_Comics_Vol_1?oldid=2794251"
Community content is available under CC-BY-SA unless otherwise noted.