The All-Star Squadron was a team of superheroes protecting the home front of America during World War II. Though originally formed out of the Justice Society of America, many other costumed heroes joined as well, making practically every American "mystery man" that was active during the war a member. Like all super-powered heroes, they were barred from direct participation in the war, by a magical barrier created by the sorcerous efforts of Adolf Hitler and the Dragon King, using the Spear of Destiny and the Holy Grail. The team had overlapping memberships with the Justice Society, the Seven Soldiers of Victory, the Young All-Stars, and the Young Allies.

The All-Star Squadron was created by Roy Thomas, Rich Buckler and Jerry Ordway, first appearing in a back-up story in Justice League of America #193 (1981). 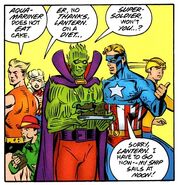