The All-Star Squadron was the premiere superhero team in the United States during World War II. President Roosevelt asked all available superheroes and mysterymen to unite, but their activities were limited to the home front so they could not fall under the influence of Adolf Hitler's Spear of Destiny.

Late into the evening of December 6, 1941, President Roosevelt and an advisor attempt to contact the Justice Society of America but no one answers as their headquarters is empty. In Los Angeles, Johnny Chambers and Tubby Watts cover a charity foot race among the Flash, Green Lantern, and Wonder Woman, with the Amazon winning by a nose. Wildcat presents Wonder Woman with a trophy noting that he had been wanting to meet the three heroes. The heroes take their leave and meet up (minus Wildcat) in nearby Echo Park where they encounter Solomon Grundy. None of the heroes have fought Grundy yet the villain claims to have fought them before. Grundy bests the costumed trio and is summoned by a mysterious voice to deliver them or "pay the penalty."

Roosevelt makes another attempt to contact the JSA with no luck. Meanwhile, in New York City, Sandman, Starman, and Johnny Thunder (with his personal Thunderbolt), are defeated by the notorious Sky Pirate. Simultaneously, Dr. Fate learns through the Orb of Nabu that Wotan has returned despite having been defeated "forever." The sorcerer quickly departs despite his wife's admonishment that he is not as powerful as before. Wotan uses a disguised Spectre to defeat his old nemesis, thereby defeating them both.

Somewhere in the South Pacific, Ensign Rod Reilly tries to dissuade his sister Danette from her risky volcano research. Elsewhere, in Gotham City, Superman, Batman, and Robin open a new USO club but are defeated by Professor Zodiak. In Washington, DC, the Atom, Dr. Mid-Nite, and Hawkman are attacked at the Lincoln Memorial by The Monster. When the trio best the horror-inspired villain, The Monster changes into an old man mentioning the name Degaton as the person responsible for the attack. Witnessing this is a mysterious man who then walks away "making strangely metallic sounds upon the rough concrete." As the clock strikes midnight, Roosevelt reveals he had hoped to have the JSA ready in case of a Japanese attack. Still unsuccessful in contacting them, the president is cautiously optimistic the United States will "come through this."

On the day of the bombing of Pearl Harbor, President Franklin Roosevelt gathers available superheroes at the White House and asked them to work together to battle sabotage and keep the peace on the home front during World War II. At the time, many of the Justice Society members had been captured by the villain Per Degaton, but the available heroes were asked to first guard against a potential attack on the American West Coast.

Degaton himself used some stolen Japanese planes to launch such an attack, so the new Squadron's first major mission was to stop the attack and rescue the captured heroes, who also became part of the new group. The rationale for not using the Squadron in combat situations in the European or Pacific Theaters of War was that Adolf Hitler had possession of the Spear of Destiny, a mystical object that gave him control of any superheroes with magic-based powers or a vulnerability to magic (including Superman, Green Lantern, Doctor Fate, and others) who crossed into territory held by the Axis Powers.

The Squadron soon included also the members of the Justice Society of America (during war time also called the Justice Battalion), the Freedom Fighters and the Seven Soldiers of Victory. Later there was a sub group of younger heroes, dubbed the Young All-Stars, who also were part of the All-Star Squadron. 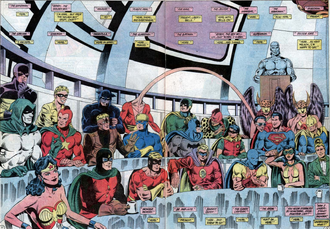 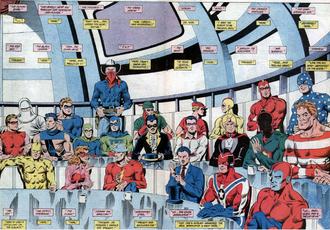