This page contains information about All-Star Superman (Volume 1) . All-Star Superman began publication in January of 2006. The series takes place in an alternate continuity from that of the mainstream DC Universe. 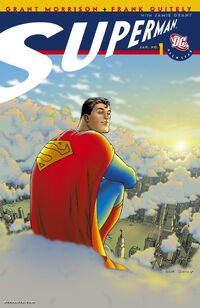 All-Star Superman began publication in January of 2006. The series takes place in an alternate continuity from that of the mainstream DC Universe.

After receiving a fatal overdose of solar radiation from Lex Luthor, Superman went about completing several final tasks (including the creation of Earth-Q, the very universe in which the 'real world' exists) before flying into the sun to save it from poisoning by the tyrant star Solaris, repairing it from within. He left behind instructions to combine his genetic code with that of Lois Lane, siring a second Superman who would form the time-spanning Superman Squad that would defend this Earth for all time, led by the original Superman emerged from the sun as a near-divine golden being.

Clark Kent's "bumbling" demeanor is seen in this series, a throw-back to his early characterization, seen in particular prior to the retcon of the character in John Byrne's miniseries The Man of Steel, done after DC Comics' profound changes to its continuity in the limited series Crisis on Infinite Earths. As well, the specific manner in which Clark Kent reveals his dual identity to Lois Lane differs from the same occurrence (in 1993) in the regular DC Comics continuity, which took place only after Clark and Lois were romantically involved.

Another notable difference is that Lois refuses to believe that Clark and Superman are the same man, since Superman has been so convincing in his past efforts to make it appear the two are different people. (References are made to Bruce Wayne impersonating Clark, a ruse that was used numerous times during the Silver Age era of Superman.) Writer Grant Morrison, in an interview, describes the series as "the re-emergence of the original, Pre-Crisis Superman but with 20 years of history we haven't seen."

The continuity of this title is completely separate from those of all other All Star titles.

Back to Comics Contents : Comics A : All-Star Superman Vol 1

Retrieved from "https://dc.fandom.com/wiki/All-Star_Superman_Vol_1?oldid=2732006"
Community content is available under CC-BY-SA unless otherwise noted.