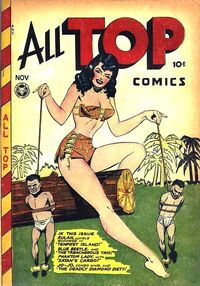 All Top Comics was an anthology series published by Fox Features Syndicate. Included in select issues were stories relating to the Blue Beetle and Phantom Lady, both of whom were later acquired by DC Comics. The only issues indexed in this database feature one or both of those characters.

Back to Comics Contents : Comics A : All Top Comics Vol 1

Retrieved from "https://dc.fandom.com/wiki/All_Top_Comics_Vol_1?oldid=2249341"
Community content is available under CC-BY-SA unless otherwise noted.