Ibis the Invincible was an Egyptian mage, fighting supernatural threats with his wife Taia.

Ibis began his life as Amentep, a prince of ancient Egypt who was in love with the beautiful Princess Taia of Thebes. As a young man, Amentep had been given the Ibistick, a talisman of incredible power, by the Egyptian god Thoth, who empowers the talisman. Amentep's throne was eventually usurped by a cruel magician known as the Black Pharaoh, who shot Taia with a poisoned arrow. Using his Ibis-stick, Amentep placed his beloved in suspended animation to allow her to heal. He soon cast a similar spell upon himself, hoping to be present when Taia revived.

Centuries later, the mummy of Amentep returned to life in an American museum in 1940. Now called "Ibis," Amentep set out in search of his beloved, eventually finding her at another museum. Seeking to adjust to this new world, Ibis used his vast powers to become a crimefighter, operating primarily in Fawcett City.

Ibis could do almost anything with the power of the Ibis-stick: build force-fields around cities, transport himself and others, and even make objects appear out of thin air. Without the wand however, he was powerless and this weakness was frequently exploited by his enemies.

Ibis and Taia became members of a team referred to as Shazam's Squadron of Justice. These heroes live in a parallel universe on a world called Earth-S. 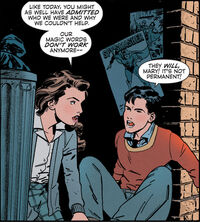 Retrieved from "https://dc.fandom.com/wiki/Amentep_(Earth-S)?oldid=2739739"
Community content is available under CC-BY-SA unless otherwise noted.