America vs. the Justice Society (Volume 1) 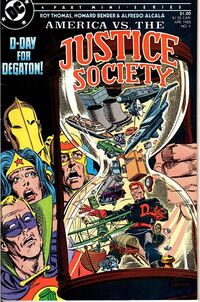 The series was written by Roy and Dann Thomas and featured artwork from Rafael Kayanan, Rich Buckler and Jerry Ordway among others.

The series was set on Earth-Two and began with the discovery of Batman's diary (The Batman of Earth 2 was dead at that point) which indicated that the Justice Society was guilty of treason during World War II and conspired to cover-up their treason after the war was over.

The group is put on trial and their history is reviewed, which eventually reveals that the diary is a hoax created by Batman in an effort to have the JSA apprehend Per Degaton at a future time that Batman believed he would not be alive for. Degaton is apprehended by the Justice Society, but he apparently commits suicide at the end of the story (though he would return in later stories; it should be noted that these are younger versions of the character, so it may simply be that this fate was still in his future, at least prior to the events of Crisis on Infinite Earths and its follow-up series Infinite Crisis). This overall premise was inspired by the then-recent revelation that the so-called Hitler Diaries that had been published were, in fact, fakes.

Back to Comics Contents : Comics A : America vs. the Justice Society Vol 1

Retrieved from "https://dc.fandom.com/wiki/America_vs._the_Justice_Society_Vol_1?oldid=1662531"
Community content is available under CC-BY-SA unless otherwise noted.