Amygdala, also known as Aaron Helzinger, is a super-strong and mentally unstable enemy of Batman. The removal of the amygdala in his brain has lessened his mental capacity and made him completely unable to control his emotional reactions, and he is very prone to violent outbursts at the slightest provocation. Helzinger is not intentionally evil, and tends to be simple-minded and good-natured, but his savagery makes him a very dangerous and uncontrollable brute. Primarily he is located in Gotham City although he has also lived in Bludhaven where he was an ally of Nightwing. He is usually seen as a patient in Arkham Asylum, and he has also been a member of the Secret Society of Super-Villains. Amygdala was created by Alan Grant and Norm Breyfogle, first appearing in Batman: Shadow of the Bat #3. (1992) 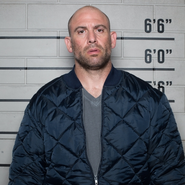