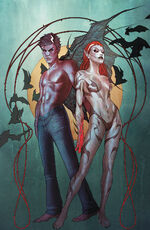 Andrew and Mary Seward spend a The Final Night together as lovers before she plans to wage war against humanity.[2] She gives Andrew one last choice to join them, then sends 300 vampires for him to slay so their kind will know him as a traitor.[3] Bennett assembles a team to hunt her down including his companions the genius Professor John Troughton and psychotic teenage vampire killer Tig Rafelson.[4] John Constantine briefly teams up with Bennett when they slay Tig's vampirized father.[5] They track Mary down to Gotham City, where Batman helps them investigate a horde of new vampire converts.[6] In the prison used to house them, all four fight new vampires until Bennett is able to slay their sire and cure them. Batman stops him from killing Mary, and Tig beheads Andrew because she believes this will kill Mary. Andrew Bennett's death causes a primordial evil called Cain, the sire of all vampires, to rise from the ground in his place.[7]

Rise of the Vampires

Main article: I, Vampire: Rise of the Vampires

Cain begins terrorizing Gotham City with his army of vampires. Madame Xanadu brings in her Justice League Dark, as this was the apocalypse they were assembled to prevent. Deadman and John Constantine are sent into the afterlife to bring back Andrew Bennett.[8] In Purgatory, a voice tells Andrew that his work isn't finished. Mary rebels against Cain when he usurps her army and ignores her.[9] Xanadu balances the scales to have Andrew share power with Cain, making them opposites in creation and destruction. Initially he refuses to leave the afterlife, but then returns to assist Mary and the League.[10] Andrew takes control of the entire army and makes them peaceful under his control, executing Cain and reuniting with Mary. His incredible new powers also allow him to undo the damage and erase the memories of everyone not directly involved.[11]

A.R.G.U.S. commissions Justice League Dark to rescue Doctor Mist, and Constantine calls in his favor with Bennett to assist them. They travel to Peru and take down a cult started by Felix Faust. The powerful object he was carrying is revealed to be a map to the fabled Books of Magic.[12] Constantine brings them back to decide their actions in the House of Mystery. Bennett considers his debt paid and decides to leave the team, but Constantine reveals he can recall visitors to the House whenever he wishes.[13]

War of the Undead

In Utah, Bennett and Mary establish a massive camp holding every vampire in North America. His nigh-omnipotent powers make him their messianic leader, although they grow restless feeding only on livestock. Tig and Troughton follow Bennett's orders and visit the ruthless monster-hunting Order of the Van Helsings for help.[14] Mary challenges Andrew for authority, and they battle in front of the entire vampire population. The Van Helsings decide to attack their camp, as this will wipe out 60% of all vampires on the planet. They napalm the settlement and air-drop an army of soldiers down to wage war.[15] In the all-out conflict, vampires feed and dead Van Helsings are reanimated into mummies with Egyptian magic. Both infections spread, leading to an insane battle of zombie-vampires and vampiric-zombie vampire-hunters. Bennett reunites with Tig and Troughton when they kill the Van Helsing leader, and Bennett admits he has no idea what he's doing.[16] StormWatch intervenes and Apollo, Jack Hawksmoor and Midnighter join the fighting. Hawksmoor suggests that they use Bennett as a vessel to contain the evil magic, the same way he contained Cain as the Demon's Lock. Bennett absorbs all of the negative energy in a wide radius, curing everyone including Mary of their plague and turning him very evil.[17]

Having taken Tig as his new vampire queen and corrupted her as he had once corrupted Mary, Andrew finds his way to the home of Deborah Dancer in Maine two months after his corruption. After he is attacked by her upon her realization that he had turned to evil, he decided that he would feed upon and turn her, remembering her purity of heart and how it had caused her to become only a half vampire, exactly the kind of weirdness he wants to avoid with his new breed of vampires and new rules of vampirism. However, when he is about to feed, he was stopped by the newly human and moral Mary, along with his former vampire-hunting friends.[18]

Though the hunters manage to subdue Tig and Andrew with a kerosene fire and rescue Deborah, her dog Mishkin is not so lucky, killed at Andrew's hand soon after their departure, and then resurrected as a vampiric dog with his powers. Andrew soon after leaves for the Oblivion Bar, where he has Tig seduce and lead out a powerful magician, Charles Francis Thompson, who he wanted to be a general in his new vampire army. After some convincing, the vampire duo manages to convince Charles to let Tig bite and turn him.[19]

Searching for an artifact for his plan, Andrew goes to The Armory that is the headquarters of the Order of the Van Helsings. Despite a fierce opposition, he makes his way along with his companions down into their archives.[20] Soon after, he massacres most of the Van Helsings, escaping the fortress with the stone that touched Heaven at the top of the Tower of Babel, along with the Van Helsings' keeper of the books as a new vampire, arriving within and taking control of the House of Mystery.[21]

In the defense against infiltration, Andrew manages to kill John Troughton, only to be restrained by John Constantine soon after with magic. Seducing Mary to try to turn her to vampirism again, he is surprised when Tig, realizing that he killed her father, decapitates Mary and promises to kill him as well.[22] Fighting both Tig and the vampire hunters, Andrew accidentally reveals that he plans to destroy the world by merging Heaven and Hell through a portal connecting both, against the vampires' plans of world domination instead. Not long after he loses even their support, Cain removes the souls of all vampires, trapped within Andrew since Cain's prior defeat, sifting through them until he finds that of Lilith, his bride, and throws it into the body of Tig. Andrew, though brought to his senses and wanting to stop the end of the world, is stopped by the spirit of Mary herself, who wants to help as well.[23]

While Mary, an agent of God, fights the Lilith-possessed Tig and Charles, Andrew, though unsuccessful in killing Cain even with the help of Deborah, has him eternally imprisoned within the House by Lucifer, then pushes the Keeper of the Books into the destructive portal with some help from Mishkin, destroying the portal with the Keeper's gruesome demise and the resultant destruction of the Tower of Babel brick, as well as having Lilith's soul sucked out of Tig's body in the process and forced back to Hell. Mary, unable to stay in the mortal realm after her mission to kill Lilith was completed, says her goodbyes to Andrew, each professing their love to the other, and she admits that being a vampire did not make her evil, but rather herself. With the world saved, Andrew whines to Deborah against killing Tig and Charles, their last vampires to kill, noting that they are too stupid to get in any trouble.[24]

Some time after the fall of Cain, Andrew worked to control the vampire population, though not without issues.[25] He is famous as the "Lord of Vampires" amongst those who know their lore, ruling over them and controlling their populations to prevent them becoming a threat to the living. He becomes aware of the newly turned Cissy Chastain, for whom he comes to the home of Atsuo Uchida, the vampire hunter "Silver," to bring her away from the living and teach her the ways of vampires. However, much to his shock, Silver has taken in extremely large amounts of holy water, which causes him to be extremely toxic to vampires. Cissy, having bitten him, immolates in Andrew's arms, leaving naught but an ashy skeleton. Surprised by how novel this approach is, Andrew simply leaves the mansion in a swarm of bats without confronting either Batgirl or Strix, who had come to save Cissy before learning of her vampirism.[1]

Retrieved from "https://dc.fandom.com/wiki/Andrew_Bennett_(Prime_Earth)?oldid=2665548"
Community content is available under CC-BY-SA unless otherwise noted.