The daughter of two great heroes explored the universe, forging new pathways between worlds and uniting them like never before at great personal cost.

Andy Curry is Aquawoman, the daughter of the original Aquaman Arthur Curry and Mera, and the former apprentice of the second Aquaman Jackson Hyde. She is a member of the Justice League.

As the daughter of two Justice Leaguers, Andy Curry regularly visited the Hall of Justice as a child, and knew the members of the team.[2] When she was a child, the Hyperclan attacked the League, far more brutally than anything they had done before. When the Hyperclan had been defeated she heard her parents arguing about the punishment the League had subjected them to, which Arthur believed was too cruel.[3] 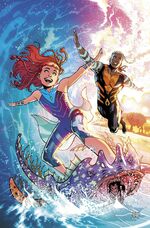 As a teen, Andy was the sidekick of her father’s protégé Jackson Hyde, the former Aqualad. She frequently argued with Jackson, accusing him of being an inferior successor to her father, but in reality viewed him as an older brother.[1] She also disliked the codename “Aqualass” which he gave her, insisting on being referred to as Aquawoman.

On a mission to recapture Jackson’s father Black Manta, Andy got involved in the fight despite being explicitly ordered not to and they were both knocked unconscious, allowing Manta to escape. During the subsequent argument the water around them changed colour and they were suddenly surrounded by strange marine life. They had accidentally slipped into The Confluence, and been transported to an alien world.

Andy and Jackson wandered around the Confluence, helping people on every world they found themselves, searching for a way home. Eventually they were attacked by a gigantic sea monster which was the protector of the Confluence. Jackson was able to escape the beast’s tentacles by shocking it with his electrokinesis, but Andy was too weakened by its toxin to break free or control it. To force Jackson to leave her behind she severed her own foot, which he was hanging onto, with a hydrokinetic blade. She attempted to tell Jackson a message to give to her parents but he was unable to hear.[4]

Andy was able to slash the beast’s tentacle with her blade just as it was about to eat her, causing it to toss her aside. She washed up on an island unconscious and near death from blood loss. She was woken up by the “glimmerfish”, a shoal of intelligent, telepathic alien fish just off the coast. She begged them for help but they refused to do anything without deliberating amongst themselves for up to six Earth months. In incredible pain and desperation, she accidentally used her telepathic abilities to force one of the glimmerfish to leave the ocean and attach itself to her, transforming into a prosthetic leg.

The glimmerfish ordered Andy to release their brother and leave the island immediately but she refused to do so until she had found Jackson. For the next few months she lived on the island, using the survival skills Jackson had taught her to hunt for food and build a shelter, as well as fighting off creatures sent by the glimmerfish to drive her away. Eventually the glimmerfish forced her to leave by sending a tidal wave that destroyed her camp.

Andy spent the next six years travelling through the Confluence, searching for Jackson, sharpening her skills and fighting anything the stood in her way. She eventually tracked Jackson to Neptune, where he was being held prisoner. She used her telepathic abilities to make luminescent plankton arrange themselves on the surface of the water to spell out “AQUAWOMAN LIVES”. Jackson, who had previously believed Andy was dead, saw this during his latest escape attempt and realised his former apprentice was coming.

Aquawoman attacked the prison with an army of Neptunian sea life and fought her way into the warden’s office, where Jackson was battling the guards. When she realised Jackson had been held prisoner by the Neptunians for years she attacked them in a rage, threatening to kill them all. Jackson told her that was not their way, and to let the Neptunians live so they would remember who had beaten them. They escaped to the surface and Jackson ordered Andy to release the creatures she was controlling. Once they were safe Andy broke down crying from the stress of their experiences. Jackson comforted her, assuring her that she had done well and they would make it home eventually.[1]

As an adult, after returning to Earth, Andy would operate as the superhero Aquawoman while her parents and mentor were in the Confluence. She joined with other inheritors of heroic legacies to form a new Justice League to save the multiverse from a crisis involving Darkseid and Starro. As the original League had been betrayed and destroyed by one of its own, the new League operated under a charter which prevented the members forming relationships or becoming involved in each other’s personal lives. Andy made a show of spending as little time with her teammates as possible, although in reality she maintained a secret friendship with The Flash.

The League responded to an alert at the old, abandoned Hall of Justice, where the Legion of Doom had been murdered. Among those killed was The Flood, who was widely regarded as Aquawoman's archenemy, although she never thought of him as such. Aquawoman and Flash were attacked that night at the Curry Lighthouse by members of the Hyperclan disguised as Superman and Wonder Woman. The Hyperclan captured and imprisoned the Justice League, then impersonated them.[2]

The League were transported to Earth Omega, a planet of ash and fire in an alternate universe. They discovered a camp with Martian writing carved on a nearby rock face, and Andy deduced that the impostor League were the Hyperclan, and that the world they were on was the punishment her father had considered too severe. The League quickly began infighting when Andy pointed out that any of them could be White Martian impostors, but they were able to prove who they were by sharing secrets they had discovered about each other. Flash revealed that Andy talks in her sleep, much to her embarrassment.

Batman remained suspicious of the others, particularly Flash, which almost brought him and Aquawoman to blows. However, Flash was able to use their ability to travel across alternate dimensions to transport the group home. They arrived back on Earth just as the Hyperclan were about to put their plan into action and attacked. Protex fled into the Hall of Justice, chased by Batman and Flash. Andy followed them in to find two Flashes fighting, each insisting the other was Protex in disguise. Andy identified Protex when the real Jess referred to her as “Princess”, their private nickname for her. She attacked Protex with a concentrated jet of water and destroyed the Hyperclan’s machine. When the Hyperclan were defeated and recaptured, she went out for dinner with the rest of the League. A few months later the League met in the rebuilt Hall of Justice to decide who they would invite to join.[3]

Retrieved from "https://dc.fandom.com/wiki/Andrina_Curry_(Future_State)?oldid=2881831"
Community content is available under CC-BY-SA unless otherwise noted.