Start a Wiki
This page contains information about Animal Man (Volume 1) . Animal Man, volume 1 was one of the original Vertigo titles, starring Animal Man. The obscure hero was initially given a four-issue mini-series scripted by [[Grant Mor
Animal Man Vol 1 (1988-1995) 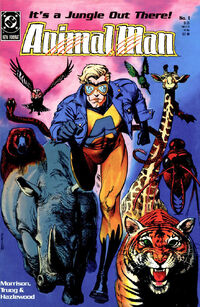 Animal Man, volume 1 was one of the original Vertigo titles, starring Animal Man. The obscure hero was initially given a four-issue mini-series scripted by Grant Morrison which was expanded to an ongoing with successful sales. Starting in issue 5, Morrison began a two-year-long storyline that lead to him appearing in the comic and giving A-Man cosmic awareness and the ability to break the Fourth Wall. Following Morrison's departure to focus on Doom Patrol (Volume 2) (another of the first Vertigo comics), the title was taken over by a short stint by Peter Milligan (writer of Shade, the Changing Man (Volume 2), another of the initial Vertigo titles) set in Earth-Twenty-Seven, Tom Veitch for a year and a half, Jamie Delano on the longest run of the series, and a brief period scripted by newcomer Jerry Prosser before the series was canceled due to low sales.

All issues (including the annual and Secret Origins (Volume 2) #39) have been collected, minus Prosser's run. Genre-wise, the title shifted focus from an innovative but fairly straightforward superhero comic with several direct ties to DC Universe continuity and then slowly drifted to horror and finally a kind of mystical treatise as Animal Man becomes a cosmic entity by the end of the series.

Back to Comics Contents : Comics A : Animal Man Vol 1

Retrieved from "https://dc.fandom.com/wiki/Animal_Man_Vol_1?oldid=2587860"
Community content is available under CC-BY-SA unless otherwise noted.