Anti-Batman is a term used to describe villains who borrow heavily from the Batman either in theme, style, background or M.O. A significantly large amount of characters have been created with this purpose, some as primary Batman Villains, and others who meet Batman only tangentially. Although there are many villains who act as almost Batman copycats, the term "Anti-Batman" is also often applied to villains who mirror one classic Batman aspect, but pervert it in some way.

The original Anti-Batman, Killer Moth was created as the exact opposite of Batman when he set out to become criminals' "guardian angel". Killer Moth copied almost all of Batman's M.O. and style to assist evil-doers against the law.

Often considered the purest Anti-Batman is the villain known only as Wrath, who first appeared in 1984. The Wrath's origin is a direct criminal parallel to that of the young Bruce Wayne's. His parents were a pair of burglars he idolized heavily until they were shot by a police officer. Although the police officer had believed the two were finishing a robbery, in reality they had been simply skipping out on their rent. The Wrath grew up hating all forms of the law, and swore revenge against it in a matter almost exactly the same as Batman's War on Crime. The Wrath traveled the globe honing his mind and body to near perfection, before beginning a one-man worldwide vendetta against those claimed as heroes for working to uphold the law. He even adopted a costume nearly identical to Batman's. Although the Wrath added firearms to his arsenal, and other items for lethal force, he also came equipped with a utility belt, Wrath-vehicles, and an outfit essentially Batman's, but maroon instead of black, and embedded with a "W" instead of a Bat-symbol. In his first appearance in Gotham City, he came into conflict with Batman while he was attempting to assassinate Commissioner Gordon.[1] Although the original Wrath would eventually be defeated, his successor would later appear to fight Batman and Nightwing many years later as an act of revenge.[2] This Wrath would also be apprehended.

Appearing much earlier than the Wrath was "Thomas Blake," the nefarious Cat-Man. Cat-Man first appeared in 1963,[3] and borrowed essentially his entire identity from Batman, the only notable difference being that everything was Cat-related instead of Bat-related. i.e., Cat-Man had a Catmobile, a Catrope, and threw Catarangs. Keeping in style with many other villains of the Silver Age, most of Cat-Man's crimes revolved around cats. Thomas Blake was likewise a millionaire, but had formerly been a big game hunter. Throughout his career, he would also frequently team up with Catwoman, naturally as they had matching M.O.'s. However, Cat-Man was often considered sort of a joke amongst the villain community. He went so far as to actually join a team called the Misfits along with other second-string Batman Villains Killer Moth and Calendar Man. For awhile he descended into obscurity, and some meetings with Green Arrow revealed him to have sort of become a fat has-been loser. However, after being almost killed by Monsieur Mallah and Warp, he reexamined his life, and went to live in Africa for a time, joining a pride of lions who adopted him as family. During the events of Villains United, he joined the Secret Six to help combat the Secret Society of Super-Villains, who had slaughtered his lions in response to his refusal to join their ranks. At this time he revealed himself to be much more competent than he had ever been before, often proving a match for many members of the Society at once before he could be brought down. His time in Africa made him not only strong, but rugged and manly. Currently, he exists sort of outside of the title either "Hero" or "Villain." Although he never actively attempts to act evil, as a member of the Secret Six he functions as a mercenary, still occasionally coming into conflict with heroes. Cat-Man has stated he continues to associate with disreputable characters such as his close friend Deadshot, because he would rather be with those aware they are villains, than those claiming to be heroes who abuse their power.

Hailing from the island of Santa Prisca, the man named only Bane was yet another interesting Batman parallel. Bane was a hulking behemoth of a man, whose brawny physique could only be matched by his ingenious mind. He determined Gotham City was sort of the ultimate proving ground, and launched a campaign to wear Batman down both physically and mentally until he had nearly reached his breaking point, then crippled him and took over Gotham's entire crime element for himself.[4] This required immense studying of Batman on Bane's part, and Bane not only assembled a detailed psychological profile, but singlehandedly deduced Bruce Wayne's secret identity. Although Bane would eventually be defeated by Bruce Wayne's replacement, Jean-Paul Valley (who was later removed from the title back to his original persona of Azrael), he wouldn't come into contact with the genuine Batman again until Bane met and joined up Ra's al Ghul, Talia al Ghul, and the League of Assassins. During the events of both "Legacy" and "Bane of the Demon," Bane would actually gain Ra's' respect, causing Ra's to make an interesting change in judgment. In al Ghul's first encounter with Batman, he had been attempting to groom his as a possible husband for his daughter Talia, believing him to be at the peak of human ability. Bane was actually almost adopted by Ra's as his son-in-law, although the two were defeated by the Batman Family and had a falling out. Although Bane reformed for a time, and not only became an influential and positive political force in his native Santa Prisca, but teamed up with Batman on several occasions. He has recently however returned to his life as a villain, having killed the original Judomaster during the Battle of Metropolis.

Prometheus first appeared fighting the JLA during the "New Year's Evil" event,[5] kicking off an arc that would run through issues of JLA. He was created by Grant Morrison, and is similar to the Wrath in many aspects. He is also a master combatant and strategist, and when he first revealed himself to the world not only managed to sneak onto the JLA Watchtower, but incapacitated essentially the entire League singelhandedly, including Batman (whom he defeated in one-on-one hand-combat), Superman, Wonder Woman, The Martian Manhunter, The Flash, Green Lantern, Steel, Zauriel and Huntress. He was finally defeated by Catwoman, who had also snuck onto the Watchtower, although only because he had been unprepared for a rogue faction such as her and she had caught him off-guard while the rest of the League reassembled. He would reappear to fight the league later as a member of Lex Luthor's Injustice Gang (also defeated). Although Prometheus' secret identity has yet to be revealed, his origins mirror the Wrath's almost exactly (the Wrath's identity is also unknown). His parents were likewise criminals whom he had idolized, but were killed by officers of the law, causing him to launch himself on a personal vendetta against Justice. More recently, after an absence from the public eye for some time, he enlisted with the several years newer Bat-foe "Hush", detailed in the next paragraph. Whereas he's clearly one of the more formidable villains in the DCU, he operates at his own pace with his own agenda, and is rarely a part of the larger team efforts of the general villain community. Working as Hush's assistant, his actions were more specifically directed towards and against Batman, viewed as one of the greatest possible conquests for the immoral anyway. However, Hush was eventually deposed by Batman, and Prometheus had faded back into obscurity. He later returned in an insane plan to shrink cities. One of the devices malfunctions, destroying Star City and he is killed by Green Arrow in reprisal. 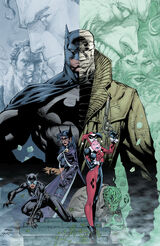 Thomas Elliot grew up a close friend of young Bruce Wayne's, but in contrast to the Wayne family's loving relationship, hated his parents, and had an abusive father. To avoid his father's beatings, his mother forced him to always study hard at Aristotle, Sun Tzu, Machiavelli, and others who excelled in keeping steps ahead of their enemies. Finally, in an attempt to rid himself of his parents and at the same time inherit their fortunes, Elliot cut the brakes on his parents car. Although his father died in the crash, Thomas Wayne was able to save young Tommy's mother, who remained horribly disfigured. Growing up "wiping spittle" from a "crazed woman"'s mouth, Tommy blamed all of his problems on Bruce Wayne and the Wayne family, and swore his revenge. His psychiatrist during these times was actually Jonathan Crane. Later on in life, an immensely successful surgeon, Elliot actually teamed up with the Riddler when he was operating on him for terminal cancer. The Riddler had recently learned that Batman was in fact Bruce Wayne, and the two of them launched a scheme to take out their mutual nemesis. The scheme involved massive manipulation of all other members of Batman's rogues gallery.
What separates Hush from other Batman villains is he is one of very few to not have an exterior motive. Whereas many view Batman just as an obstacle towards their higher ambitions, Hush wants only to destroy Batman, and is in fact willing to sacrifice the immense personal fortune he has already amassed to achieve this end. The only other villain his dedication even comes close to matching is the Joker himself, and the two of them have actually ended up in many physical conflicts over time.
Tommy Elliot uses somewhat similar methods in equipping himself as Batman does, and underneath his flowing trench coat his utility belt and armor appear to be very much the same. Whereas Batman wears a long flowing cape, Hush wears a flowing trench coat. And their masks are both symbolic of things that sparked their careers, Bruce Wayne wearing the mask of the Bat that inspired him, and Elliot's bandages reminiscent of those of his mother's after her accident.[6] The leading departure of course in their respective M.O.'s is Hush's usage of dual-wielded handguns, of course as Batman refuses to use lethal weapons.