Originally, it was said to have existed in the mind of "Billion Dollar" Bates, who took it to his death. Darkseid continued to search for it, and recently obtained the full formula. It implants the mathematical certainty that all life is hopeless and that freedom and hope are futile concepts, doomi

Emotional turmoil breaks the dikes of the mind-- And releases the flood in which we must fish, Desaad! Perhaps in this very city is the mind which will yield the Anti-Life Equation! The ability to control all free will!Darkseid

The Anti-Life Equation was a transcendental mathematical formula originally said to allow those who knew it to dominate the will of any sentient race; this is the ultimate goal of Darkseid.

Originally, it was said to have existed in the mind of "Billion Dollar" Bates, who took it to his death. Darkseid continued to search for it, and recently obtained the full formula. It implants the mathematical certainty that all life is hopeless and that freedom and hope are futile concepts, dooming those who hear it to despair.

The first sign of the Equation came about 300 years ago, when Darkseid made contact with the Martians. When he learned that Martian philosophy was based on the "Life Equation"--which equals free will--he postulated that the opposite must also exist.[1] Darkseid later focused his attentions on Earth when he discovered humanity possessed fragments of the opposing Equation in their subconscious and conducted experiments on humans over the centuries in an attempt to obtain the full formula.[2]

The Anti-Life Equation has the power to dominate the will of any sentient race in addition to reality-altering powers that twist and distort freedom over life and death. It derives its name from the fact that "if someone possesses absolute control over you—you're not really alive."[3] Though the full version of the Equation is barely known to any one person, it supposedly existed in the mind of the billionaire "Billion Dollar" Bates, though he took it to his death. The Anti-Life Equation was also found in the time-displaced Sonny Sumo, according to the Forever People's Mother Box.

Later, Darkseid used clones of "Billion Dollar" Bates, made by Desaad, to access the Equation. Orion stopped the clones, gaining the full formula in the process, and wanted to use the Equation for good by enforcing goodwill among the populations of Apokolips and Earth, but realized that the very nature of the formula was against free will and, therefore, voluntary goodwill so he eventually forced himself to relinquish the Equation's power.

Mister Miracle knew the full formula but possessed the willpower to not use it. One member of Young Justice, the Empress, possesses pieces of the Equation, giving her limited mind control. The Pied Piper also possesses the formula in his mind and has been using it unknowingly with his sonic energy.[4] He eventually became a pawn of Desaad so that the New God could use the Equation to kill Brother Eye and Darkseid and rule Apokolips.

Increasingly unbalanced by the death of his wife, Big Barda, Mister Miracle decided to use the Equation. Subsequently, he became determined to hunt down the killer of the New Gods. He came face to face with the entity behind it all, the Source, and was killed himself. It was then revealed that the Anti-Life Equation is an entity that is the dark half of the Source, with which the Source was now finally reunited. When Darkseid became the last of the New Gods, he faced the Source in combat, wherein Darkseid revealed that he had created a serum that allowed him to draw power directly from the Anti-Life Entity/Equation. Despite this boost in power, in the end Darkseid was also killed.

Main article: Final Crisis
Due to Darkseid's knowledge of the full equation and his will to use it, he made sure he was spiritually reborn in the body of a human on Earth. He became "Boss Dark Side," but the human shell was not enough to fully contain him and he was eventually killed again. He then used the spoken word to be reborn again, this time fully, in the body of Dan "Terrible" Turpin. He also developed his base on Earth, warping it and turning the planet into a replica of Apokolips. Now seemingly in control of several billion people through a mass host consciousness, Darkseid used the Equation to turn heroes, civilians, and villains alike into mindless, slavish extensions of his will.

The Equation was ultimately broken when Wonder Woman, herself a slave of Anti-Life, was freed of the Equation and bound Darkseid with the Lasso of Truth, thus breaking the Anti-Life Equation's hold on the people of Earth.[5]

The Equation was broken and its remnants remained on earth, spread across the internet as fragments of digital code. Calculator tried to retrieve the code to heal his comatose daughter and Oracle tried to collect them in an attempt to completely eliminate them from Earth.[6] Calculator's fragments of the formula caused people to lose their entire immune system and to prevent this use of the Equation, Oracle nullified its effects and destroyed the fragments.[7]

In the Prime Earth continuity, the Anti-Life Equation--much like the Life Equation opposite of it--functions very differently. Here, the Equation, rather than being simply a means of mass possessive control and multiversal reality disruption, is instead used by Yuga Khan as a means of resurrecting the Old Gods as well as himself in a host body. According to this host, with a small portion of the Anti-Life, he could feel all of the pain of the New Gods, a pain that only Yuga Khan could heal.[8]

The Equation itself is the same as in New Earth, but has more varied applications. Speaking the Equation, Dreamer Beautiful was able to resurrect a dead Mark Moonrider and force the submission of the Femmes Fatales with a word, but it appears that the Equation is not as viral as it was on New Earth, and now it is required to be stated by select users, rather than being able to brainwash many.[9]

Over time, the Anti-Life Equation is further expanded upon by its interactions with Darkseid's daughter, Grail, and the mysterious new Anti-Monitor.[10] The Equation is revealed to be as much a sentient entity as it is a formula; one that hails from the Antimatter Universe.

Mobius, a Qwardian scientist, was desperate to learn the secret that gave birth to his universe. Mobius' thirst for the knowledge of his universe's creation would be his downfall, as such knowledge was forbidden, thus when he laid his eyes upon it--the Anti-Life Equation--it forever cursed him, and he transformed into the "Anti-Monitor", the living embodiment of the Anti-Life Equation.[10]

The full formula typically manifests itself physically as a series of fiery, inscrutable alien symbols and glyphs which form around the one who uses it, while incomplete fragments are projected as singular glyphs.[2][11]

By speaking the Equation, Darkseid can insert the full formula into people's minds, giving them the mathematical certainty that life, hope, and freedom are all pointless.

Mister Miracle (Shilo Norman) was able to break free from this with the help of Metron, gaining immunity from the Equation in the process.

The only known antidote to the Equation are the concepts of Freedom and Hope; the New Genesis hieroglyph of Freedom, called the Metron Emblem, significantly wears down the formula's ability to dominate other wills, allowing the infected to fight against the Equation and win while exposed to the symbol. A Metron Emblem, if large enough, is able to massively disrupt the Anti-Life Equation's powers, as transmitted through various frequencies, and even wear down those wearing Justifier helmets if they are in the vicinity. Flash (Barry Allen), was also able to use the Speed Force to negate the effects of the Equation on a person under its influence.[12] 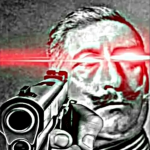