Anton Knight is the biological son of notorious gangster Charles Knight. Using his father's ill gotten money, Anton travelled across the world, learning fighting techniques and improving his stealth skills. When his father died, Anton returned to Gotham, where he met his father's adopted daughter, Natasha. Anton tried to convince her to follow his father's steps and become criminals, but at first she refused.[1]

When Natalia suffered an accident that drained the color from her skin, Anton became fascinated with his adoptive sister's new appearance. Finally, Natasha agreed to work with him in a new crime spree and using his abilities, Anton became the Thief of Night. His sole purpose for crime was to provide a fine life to Natasha, who adopted the alias of Nocturna and was pleased with Anton's devotion.[1] Eventually, Anton confronted the Batman and managed to outsmart the vigilante on their first encounters.[2] However, when Batman learned the connection between him and Nocturna, Anton was finally defeated and captured, although Nocturna managed to escape.[1] Anton was prosecuted and during his transfer to prison, Nocturna tried to set him free, but only managed to have her captured by Batman.[3]

When Knight escaped from prison, he learned of Nocturna's association with a crook by the name of Nightshade, who was infatuated with her. In return, Knight murdered Nightshade for daring think about becoming romantically involved with Nocturna and this action earned him the new alias of Night-Slayer.[4] Knight reached for Nocturna, but he was rejected by her after she learned of his killings. Hurt by her rejection, the Night-Slayer attacked Batman, who approached her romantically, but he was defeated when Nocturna turned against him and shot him in the back.[5] Knight was seriously injured, but he managed to escape from danger and avoided being captured by Batman.[6] 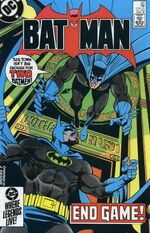 Using the sewers as his main route, Knight ended up in a body of water, where he was rescued by a blind girl, who assumed he was Batman and he took advantage of her mistake by following the charade.[7][8] When he recovered, Knight went to Nocturna's apartment, where he tied her and her new adopted son, Jason until the Batman arrived and confronted him. Knight was defeated but the unexpected arrival of the criminal known as Doctor Fang gave him the needed advantage to defeat Batman and convince him that he was in fact the Night-Slayer. Like this, Knight stole the Batsuit and stole the Batman's identity.[9]

For three nights, Knight impersonated Batman and committed several crimes, soiling Batman's name and reputation. He was eventually confronted by Robin and Nocturna, but he managed to escape from them.[10] Knight continued on his crime spree until he was unmasked and exposed in front of the police and the press. Using Mayor Hill as a human shield, Knight managed to avoid the police and during his confrontation with Batman, he escaped when their struggle caused them to fall to the river.[11]

In his last comeback, the Night-Slayer started killing members of the False Face Society as he believed they were all working for Nocturna and he tried to find a connection between them in order to get his revenge against her.[12] His quest was eventually stopped by Batman, who prevented further killings, but the Night-Slayer escaped once more.[13] Despite this, the Night-Slayer continued his hunt for Nocturna[14] until he eventually learned that she was hiding at the Gotham Observatory and he went there,[15] where he stabbed Nocturna and caused her ultimate demise. Knight was subsequently stopped by the combined forces of Batman, Robin and Catwoman and the Night-Slayer was finally captured[16] and taken to the authorities, before he was committed to Arkham Asylum.[17]

Retrieved from "https://dc.fandom.com/wiki/Anton_Knight_(Earth-One)?oldid=2609047"
Community content is available under CC-BY-SA unless otherwise noted.