"American Tidal, Part 1": The shore of San Diego has been buried underwater after a tidal wave and there are thousands of casualties.<div style="width:150px;float:right;clear:none;margin-right:10px;margin-left:10px;margin-top:5px;margin-bottom:5px;border:1px solid

I wish I had something more to say tonight. Some new information. Some reassurance that it won't happen again. But I don't. So I'll leave you with this... We must get beyond this crisis. Remember it, but get past it. Continue to live. It's what our family, our friends, our fellow Americans would want. It's time to move on.

The shore of San Diego has been buried underwater after a tidal wave and there are thousands of casualties. 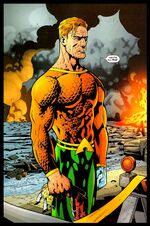 A grim announcement
Aquaman investigates the place, looking for any sign of life, but all he finds is dead human bodies. The disaster is already dubbed as the worst catastrophe in the history of the United States of America and the press are broadcasting the events live. Aquaman reaches the surface, where the cameras and reporters focus on him as he delivers the bad news: there are no survivors. After his announcement, Aquaman returns to the drowned city, where he contemplates the destruction caused by the sea.

On an official statement, President Peter Ross is unable to give any explanation or information about the disaster and all he asks of his fellow American citizens is to stand up and rise, in honor of the thousands of lives lost.

Some days later, a boy crawls out of the sea from the exact place of the disaster. The kid is unable to speak and all he does is moaning. A few moments later, a guard finds the kid, unable to move near the memorial wall in the beach and later the kid is placed in an ambulance towards the nearest hospital. On their way, the paramedics try to inject oxygen into the kid's lungs, but the whole process fails and the kid dies before reaching the hospital.

After the kid's indentity is found, the head doctor of the hospital, Dave, prepares to perform the mandatory autopsy along with his assistant, Carla. Dave asks her to remain silent about a third member in the autopsy: Aquaman. Dave inspects the body and realizes that is has no signs of decay and instead, it all indicates that the body has been healing. He also notices some strange bruises on the kid's body and Aquaman informs him that those marks are caused by salt water after a body has been exposed to it for a very long time; certainly much longer than the time it's been since the disaster. When the doctors open the kid's stomach, they find residue of fishes, both complete and semi-digested. Aquaman then suggests to open the kid's throat and the doctors find something they've never seen in their entire careers: gills. Aquaman then proceeds to explain that the kid's death wasn't caused by being in the ocean, but rather because he was taken out.

Retrieved from "https://dc.fandom.com/wiki/Aquaman_Vol_6_15?oldid=2510850"
Community content is available under CC-BY-SA unless otherwise noted.