"American Tidal, Part Three": Aquaman is in the drowned city of San Diego looking for survivors and when he finds a great number of people, alive and trapped under a collapsed building, he talks to them using telepathy with [[J'onn J'onzz (New

I just thought maybe you could use some help.

Aquaman is in the drowned city of San Diego looking for survivors and when he finds a great number of people, alive and trapped under a collapsed building, he talks to them using telepathy with Martian Manhunter's help. Aquaman tells the people to stay underwater as he removes the building that has trapped them down there. When Aquaman lifts the building, a couple of kids try to reach the surface looking for air, but they are stopped by a large shoal of sharks under Aquaman's command. When the kids join the rest of the survivors, Aquaman talks to them once more and tells them about the catastrophe that destroyed part of San Diego and how they were thought to be dead. Finally, Aquaman delivers the hardest truth to them: they have developed the ability to breathe water, but they can't breathe air, thus making it impossible for them to return home. 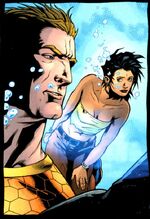 Lorena joins Aquaman
In the meantime, Lorena recovers at the Justice League Watchtower on the moon and Martian Manhunter informs her about the cataclysm and the current situation down on Earth. Together, they watch Aquaman's efforts to find more survivors and Lorena asks Manhunter to teleport her down there as well in order to help.

Lorena is teleported to the submerged city and she reaches Aquaman, offering her assistance. Aquaman takes her with him and they bring all the help they can from the surface. Lorena is curious of what will happen next to the people like her and Aquaman tells her that he's going to help them adapt to their new lifestyle.

After many survivors have been rescued, a dolphin approaches Aquaman and tells him something about a strange device that has been placed underwater. Aquaman and Lorena follow the dolphin to the location of this mysterious machine, which is of unknown origin. The dolphin tells Aquaman that the machine is making a similar noise as the day the city was struck and after a close inspection of the machine, Aquaman finds an strange organ-like object with eyes inside it, which is apparently breathing.

Retrieved from "https://dc.fandom.com/wiki/Aquaman_Vol_6_17?oldid=1883249"
Community content is available under CC-BY-SA unless otherwise noted.