Lorena attacks Geist
Aquaman and Lorena break into the apartment of Anton Geist, who Aquaman has identified as the man responsible for some of the events that happened after the cataclysm that submerged part of San Diego underwater. Lorena can't control her anger and she attacks Geist with reckless abandon, beating the man to a pulp until she is stopped by Aquaman.

When Aquaman explains that Lorena is one of the survivors, Geist gets excited and tries to analyze Lorena as a test subject, giving away the truth that he is in fact responsible for the mutagenic transformation that some of the victims of the disaster went through after they drowned. Aquaman is very angry and he pulls Geist's head underwater in one of his own fishbowls until the point of asphixiation, just to make the man experience the moment that hundreds of people went through because of him.

After Aquaman releases Geist, the man explains his motivations for proceeding with what looks like an inhuman decision. Geist's years of research and investigation have lead him to the conclusion that Earth is soon going to change due to the effects of climate and as a result, most of the surface that humans currently occupy is going to be submerged underwater. His ultimate goal is to allow people to live underwater, even if it makes them unable to stay in the surface for long and he did this by introducing a genetic anomaly in the water supply of San Diego. 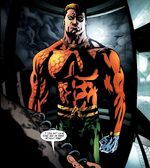 Aquaman learns an uncomfortable truth
When Aquaman asks Geist for an explanation on how did he managed to create the genetic anomaly, Geist explains that he got the DNA sample from the only water breather that has been on the surface longer than any other of his kind: Aquaman. Geist explains that his plan started several years ago and when he learned about a ceremony in which Aquaman was going to be a part of, he got a job as a member of the crew of the place where the ceremony took place. Geist kept a close eye on Aquaman and at the end of the ceremony, he took the cup that Aquaman drank from and took it to his laboratory, where he extracted the sample and created the serum. At first, his test subjects never survived the transformation, but after three years of trials, he managed to create the perfect serum and he released it in the water supply.

Aquaman is frustrated with his involvement in Geist's mad plan and he wants to know who helped him create the gigantic machine that is currently placed underwater. Geist refuses to tell the truth and Aquaman threatens to kill the man if he doesn't comply. Geist knows that Aquaman won't kill him and he remains silent about his accomplices. When Aquaman asks Lorena to decide Geist's fate, he realizes that she has passed out on the floor and she is not responding. Both, Aquaman and Geist try to save Lorena and working together, they manage to bring her back to life. Geist's knowledge on the subjects proves useful to save Lorena and Aquaman lifts her from the ground and starts carrying her back to the sea again. Geist tells Aquaman that he doesn't want more people to die and he would wait to finish their conversation, but Aquaman doesn't trust Geit's and he drags the man along with him as well.

Retrieved from "https://dc.fandom.com/wiki/Aquaman_Vol_6_19?oldid=2510854"
Community content is available under CC-BY-SA unless otherwise noted.