"American Tidal, Part VI": Aquaman takes Lorena and Anton Geist back to Sub Diego as Lorena needs water to recover and Aquaman wants Geist to witness the effects of his actions. Using

Aquaman takes Lorena and Anton Geist back to Sub Diego as Lorena needs water to recover and Aquaman wants Geist to witness the effects of his actions. Using an oxygen tank from the rescue teams, Geist is carried down by Aquaman and he sees the devastation and death that has taken place underwater. When they finally reach the place where all the survivors are, Geist can't help but feel guilty.

Geist tells Aquaman that he wasn't responsible for the disaster and Aquaman asks him once more about the people behind the machine. Geist tells Aquaman that he never met the people behind it all, but that they managed to put something in his brain from which they monitor all his actitivites. Aquaman uses his water hand to reach inside Geist's skull and retrieve the device inside before allowing Lorena to destroy it. Aquaman and Geist know that whoever is behind it all have been monitoring them and that Geist's life is in danger, reason why they start planning something.

Meanwhile, the people of Progene Tech are monitoring the area of Sub Diego, waiting for Geist to come up. When he reaches the surface, Geist is floating on an inflatable lifeboat as he cuts his wrists and puts his hands on the water. A few seconds after this, a group of sharks attack Geist, apparently killing him. All this happens as the people from Progene Tech watch and they stop monitoring the area knowing that Geist is now dead. 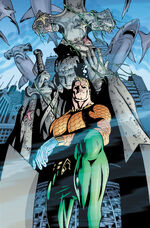 Aquaman builds a new society
However, underneath the surface of the ocean, Geist is alive and well thanks to Aquaman's control over the sharks. Aquaman then commands Geist to stay underwater and do his best to help the survivors of his dreadful experiment. Using only the equipment available from the rescue teams, Geist has to remain underwater until the supplies run out. Lorena, however is disappointed that Geist doesn't meet the justice he deserves.

Aquaman and Lorena take off and they discuss the future of the people of Sub Diego. Aquaman knows that he has to become the leader of the survivors in order to guide them towards the right path and Lorena decides to help him as best as she can. Together, they bring back hope for the new water breathers and Aquaman becomes the ruler of a new society in which former humans and sea creatures work together for a better tomorrow.

Retrieved from "https://dc.fandom.com/wiki/Aquaman_Vol_6_20?oldid=2510856"
Community content is available under CC-BY-SA unless otherwise noted.