The Arkham Knight is a mysterious master strategist and commander of a personal army that surfaced in Gotham City. He wears a militaristic version of the Batsuit and is revealed as Jason Todd, who was broken by the Joker and psychologically manipulated into hating Batman. Jason was declared dead and became the Arkham Knight, assembling high-tech weapons and an army of mercenaries to get revenge on his former partner. He later abandoned the Arkham Knight identity and adopted the vigilante persona known as the Red Hood. Arkham Knight was created by Rocksteady Studios and Geoff Johns for the video game Batman: Arkham Knight, first appearing in Batman: Arkham Knight #1. (2015)

In the regular DC Universe the persona was adapted as Astrid Arkham, daughter of Arkham Asylum doctor Jeremiah Arkham. Astrid was born during a riot at the asylum, in the course of which her mother was killed. Her father home schooled her at Arkham Asylum and she grew up making friends with incarcerated Batman Villains like the Joker. She developed a grudge against Batman and soon began seeing him as an evil entity that hurt her only friends. When she became convinced that Batman was responsible for the death of her mother, Astrid started training herself into a skilled fighter in order to become the Arkham Knight and founded a cult of Arkham inmates called the Knights of the Sun. Astrid Arkham was created by Peter Tomasi and Doug Mahnke, first appearing in Detective Comics #1000. (2019) 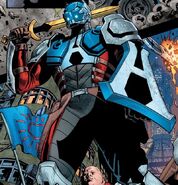 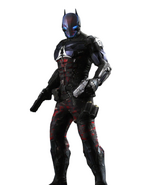 Jason Todd
Injustice
Gods Among Us