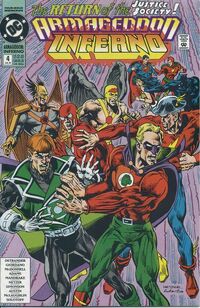 Armageddon: Inferno is the second follow-up to Armageddon 2001, which this time features the character Waverider in his primary mission to defeat the interdimensional being named Abraxis and his plans to enter into the New Earth reality, using his "daemen" as his shock troops against the heroes that Waverider gathers and places at four different points in time. In this mini-series, the Justice Society returns to active duty after having been "retired" to fighting an endlessly-repeating battle in Asgard since 1986's The Last Days Of The Justice Society, fighting against the demon in his own home dimension and empowering its citizens to also fight him.

Back to Comics Contents : Comics A : Armageddon: Inferno Vol 1

Retrieved from "https://dc.fandom.com/wiki/Armageddon:_Inferno_Vol_1?oldid=1495362"
Community content is available under CC-BY-SA unless otherwise noted.