Timid Arnold Wesker was the Ventriloquist. He had developed a separate identity for the Scarface, which he projected through his ventriloquist dummy. Scarface, however, considered Wesker the dummy.

Arnold Wesker had always been a meek and timid person, even as a child. When he was very young, his parents took him to the Gotham City shipyards to see an albatross, which was something of a local attraction. Terrified, he demanded to be taken home immediately. While his parents were distracted, a truck carrying display dummies rolled down the street, struck, and killed them. Traumatized by the accident, he became convinced that the albatross was an omen. Throughout his life he would cope by repressing all emotion and furthering his timid stature.[1]

The repression eventually resulted in a psychotic breakdown during his adulthood, in which he killed a man during a bar-fight. By his own account the murder was completely accidental. He was arrested and sent to Blackgate Prison. There he was placed in a cell with an inmate named Donnegan, who harbored an intense interest in ventriloquism. Donnegan's most prized possession was a puppet named "Woody", which he was very protective of. Despite his violent nature, Wesker became intrigued by the dummy and even went so far as to attempt handling "Woody" whenever Donnegan was out of the cell. When he discovered this, he became enraged and assaulted Wesker for touching his property.

Wesker grew despondent in Blackgate, and prepared to hang himself while Donnegan slept. Despite the fact that Donnegan was unconscious, "Woody" began talking to Wesker. Though he ignored this at first, Woody insisted that he was acting independently of Donnegan's control. He convinced Wesker to forgo suicide in favor of escaping from Blackgate and revealed that Donnegan had been secretly digging an escape tunnel from the cell for the past fifteen years. While the two spoke Donnegan awoke and brutally attacked Wesker. He also stabbed at Woody with a corkscrew, creating a long scar along the side of the face of the puppet. Wesker fought back and smashed Donnegan in the face with a loose brick. He then strung the body up with the noose he originally intended to use for his own suicide. Subsequently Wesker took Woody and escaped through Donnegan's tunnel.

The tunnel led him to the shoreline of Blackgate Island, near the prison boathouse. At Woody's urging, he picked up a riot shotgun and killed two guards before stealing a raft. They paddled to the mainland of Gotham City and, planning to begin a new life, acquired a fresh set of clothes. The puppet, unsatisfied with the name that Donnegan had given him, decided to take a new name, one more befitting an angry criminal mind with high ambitions: Scarface.[2]

Scarface became the vehicle through which Wesker could express all of his years of bottled-up rage. It was clear early on that Scarface was the dominant partner in their relationship, and Wesker always maintained a subservient and obedient countenance. 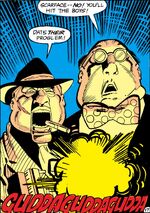 Calling himself the Ventriloquist, Wesker became a powerful drug lord in Gotham City; although it was Scarface the official leader of the mob. They operated out of a trendy hotspot on Electric Street called the Ventriloquist Club. The bouncer of the club was an over-sized leg-breaker named Rhino.[3] The Ventriloquist and Scarface made their marks in the Gotham underworld through the sale and distribution of a designer drug called Fever. This earned them the attention of the Batman, who eventually fought through the Ventriloquist's armed men and apprehended the drug lord and his puppet master.[4]

While in prison, Ventriloquist and Scarface organized a drug trade with mob boss Rafael Santini, but the whole plan was foiled by Penguin and Mortimer Kadaver, who stole the drug money and offed Santini.[5][6]

Wesker was released from prison on a technicality; which allowed him to resume his activities in Scarface's master plans. However, their drug operation had been taken over by the street gang known as the Street Demonz. In the ensuing confrontation, the Scarface puppet was completely destroyed and Wesker was finally free from his mania. Wesker got drunk in celebration, but it didn't take long before his mania returned and he joined forces with Rhino to rebuild and repair Scarface.[7] With a new puppet, Wesker gathered the members of his old gang and declared war on the Street Demonz, decimating their forces in a violent gang war and reclaiming back his lost empire.[8][9]

The Ventriloquist reopened his night club and used it to learn secrets of the underworld. Upon learning that The Joker knew the location of 25 million dollars from a botched heist, Wesker and Scarface sprung The Joker out of Arkham and forced him to take them to the money. Due to unforeseen circumstances, their plan was foiled after which they were arrested and Wesker was sent to Arkham for psychological examination.[10][11]

Time passed until a criminal known as Bane set all of the Arkham inmates free and Wesker escaped from Arkham during the chaos. In order to compensate for Scarface's absence, he briefly took to using an old sock as a hand puppet, naming it Socko. Wesker was joined by Amygdala, who acted as a bodyguard for Wesker until they find Scarface. Together, they broke into a toy store, looking for a replacement for Scarface and Batman arrived to stop them. Batman managed to defeat Amygdala, but the fight took all from him, allowing Wesker to escape.[12]

After being separated from Amygdala, Wesker and "Socko" went to the place of their last attorney at law, Mr. Detweiler and forced him to tell them the current location of Scarface.[13] The lawyer told them that the puppet might be at the police precinct where Ventriloquist was previously arrested.[14] Wesker infiltrated the precinct, killed the guard and located the locker where Scarface was being held.[15]

Once again in possession of Scarface, Wesker had troubles as his puppet Socko was in conflict with Scarface. While staying on a derelict building, Scarface and Socko started to argue and both puppets shot each other, injuring Wesker's hands.[16]

After the devastating earthquakes that destroyed much of Gotham city, an enigmatic villain appeared on television, calling himself the Quakemaster and issuing demands for a 100 million $ ransom, or more quakes would follow. Robin eventually figured out the Quakemaster's identity as Scarface, disguised with glasses and a hat — the villain avoided saying words with the letter 'B' as he would let himself slip and pronounce them as 'G'. Wesker was captured and jailed in Arkham Asylum. During No Man's Land, Wesker escaped and he was one of the villains who took control of a district of Gotham with his gang led by Rhino. He stole dropped supplies and profited from selling it to the civilians. Batman brutally took down Scarface and showed little sympathy for Wesker, saying that the puppet is just a shield he hinds his own evil emotions behind. Batman let Rhino in charge of protecting the civilians and giving them their fair share, and turned Wesker over to Lock-Up in Blackgate.

He was reunited with Scarface soon after and attempted to gain a foothold in the Wharfdale area of Gotham by eliminating a rival gangster named Marty Vetch. Scarface made a severe impact in Vetch's operations by killing one of his main drug suppliers and contaminating a shipment of heroin that belonged to his cartel. The feud between Scarface and Vetch came to a head outside of the Ventriloquist Club. During this time, Bruce Wayne had relinquished the role of Batman to his first ward Dick Grayson. As Batman, Grayson with the current Robin raided Marty Vetch's penthouse and fought with the Ventriloquist's thugs. Wesker attempted to flee down a fire escape and was seperated from Scarface. He was captured once again and sent to Blackgate Prison for psychological evaluation.[17]

While he languished away in prison, Scarface wound up in the hands of his old enforcer, Rhino. Rhino attempted to operate the puppet, but Scarface would not respond to him. After numerous attempts however, Scarface began to communicate through Rhino. The puppet instructed him to make a deal with the Penguin in order to stage a prison breakout. The Penguin agreed, and before long, the Ventriloquist was free.[18]

Reunited with Scarface, Wesker resumed his old lifestyle and crossed paths with the Batman on several more occasions. In one instance, a crazed Batman nearly killed him, but opted instead to destroy Scarface.[19] The Ventriloquist repaired Scarface yet again, only this time the criminal duo set their sights on their competition, notably the Penguin.

Ventriloquist formed an alliance with Penguin and together started a crime ring that consisted on kidnapping young pregnant girls and selling their babies to adoption. When Mister Freeze started posing trouble for their business, Ventriloquist sent all his men to eliminate him, but his plan was thwarted by Batman.[20]

Shortly after this, the Ventriloquist was attacked by the new enemy only known as The Body. The Ventriloquist and his gang were massacred on one of his own boats and the only living member left was Wesker himself. Barely alive, he controlled Scarface and told Batman everything he knew about The Body, but passed out just seconds after that.[21] Wesker was taken to a hospital and Robin guarded the criminal to protect him from another attack. The Body found Wesker's room and tried to attack him, but Robin stopped them and moved Wesker to a different room.[22]

Ventriloquist and Scarface were summoned to a meeting where all the other crime lords of Gotham were summoned as well. The meeting ended up in a shooting and Scarface killed Silver Monkey.[23] After that incident, the greatest gang war broke out in Gotham and Wesker's gang was approached by Alexandra Kosov from the Odessa Mob and they made an alliance to get rid of other crime lords in Gotham. Together, they eliminated a minor lord called Saunders,[24] and later, they targeted Darla Aquista, daughter of the crime boss Henry Aquista. Both gangs attacked the Louis Grieve High School, where Darla was attending to and they were temporarily stopped by Tim Drake, who wrecked Wesker's car and took Scarface away from him.[25]

Wesker recovered Scarface and retreated to establish a plan of action. After he gathered his gang, Wesker sent them to take over the city. However, when he was alone, The Ventriloquist was attacked by Black Mask, who subdued him and forced Wesker to work for him.[26]

Ventriloquist and the Scarface gang were present at the massive criminal gathering at Robinson Park. After the revelation of Black Mask intentions of killing his enemies, Wesker and his gang went outside the park, where they confronted the GCPD on a massive gun fight.[27]

Wesker and Scarface survived the events of Alexander Luthor's attempt to recreate the multiverse, but a year later had become a pair of washed-up criminals reduced to eating canned pasta in a ramshackle apartment. Though they schemed to return to their glory days, their plans were interrupted by the Tally Man, who had been sent by the Great White Shark to murder costumed criminals around Gotham in a gambit to frame the recently reformed Harvey Dent. The Ventriloquist stood little chance against the younger, more vicious criminal, and was killed by a single shot to the head.[28]

During the "Blackest Night", the Ventriloquist was among those resurrected by Nekron as a member of the Black Lantern Corps. Although he no longer physically possessed Scarface, he created an army of constructs that looked like the puppet with his ring.[29]

Retrieved from "https://dc.fandom.com/wiki/Arnold_Wesker_(New_Earth)?oldid=2819981"
Community content is available under CC-BY-SA unless otherwise noted.