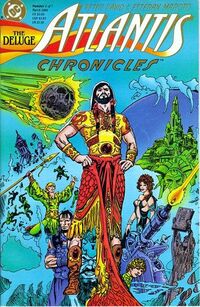 The Atlantis Chronicles was a seven-issue limited series written by Peter David and illustrated by Esteban Maroto. The series takes place in Atlantis in the years following the Great Deluge. Elements of this title become major plot threads for the 1994 Aquaman series. According to a memorandum from Dick Giordano to Robert Greenberger, many of the characters and mythology used in this series were allegedly based on papers discovered by Professor R.K. Simpson of Golden Bough University in Ithaca (based on an editorial at the end of issue #1).

Back to Comics Contents : Comics A : Atlantis Chronicles Vol 1

Retrieved from "https://dc.fandom.com/wiki/Atlantis_Chronicles_Vol_1?oldid=1502327"
Community content is available under CC-BY-SA unless otherwise noted.