Atlas is a mighty warrior and conqueror of magical origins from several centuries into the past. At a young age when his family was slain by Hyssa the Lizard King, a wise mentor raised him and he became a protector of the innocent. After defeating his nemesis though he gave into a darker and more destructive nature, consumed by his desire to become the world's greatest champion. He was brought into the present through time travel by General Sam Lane during Coming of Atlas to work for a branch of the military known as Project 7734, dedicated to fighting against Kryptonians. In this position he is an enforcer whenever Lane needs someone roughed up, although it is common knowledge that his ambition is to succeed his new masters and take the power he deserves. His name is inspired by Atlas of the Greek Titans, a mythological being with unimaginable strength, one of the entities who grants Captain Marvel his powers. Atlas was created by Jack Kirby, first appearing in 1st Issue Special #1. (1975) 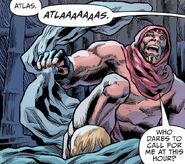 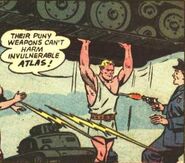 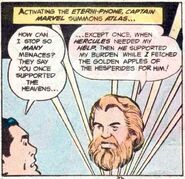 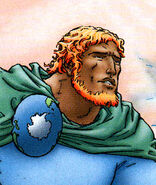 Superman: The Coming of Atlas
(???—Present)
No Articles!
Community content is available under CC-BY-SA unless otherwise noted.
Advertisement