Y'know...when I was trying to come up with a code name for myself, I thought of calling myself the new and improved Flash. Because you clearly weren't cutting it. But instead... I realized that with these powers...I am judge, jury and executioner. So I call myself... Godspeed.

August Heart was the former detective partner of Barry Allen. August was the only witness to Barry's accident, that turned him into the Flash. While going after a criminal organization called the Black Hole, August was struck by lightning during a Speed Force storm in Central City. He became the Flash's "partner", but in secret, August became the ruthless vigilante known as Godspeed, and got his revenge on who he suspected to be his brother's killer.[1]

August Heart was a police officer for the Central City Police Department and close friend of Barry Allen. Heart's brother Jorge was also a cop in the department.

One day, Jorge was shot dead while on patrol. August was devastated by his brother's death and pursued justice. Though there were no witnesses of the crime, evidence collected by the department lead to the arrest of a career criminal named Billy Parks.

However, before Parks' trial could go to court, the evidence against him was destroyed when Barry Allen's forensics lab was struck by lightning. Barry went into a coma (and later gained superspeed from the incident), but, without proper evidence, the case was dropped. Heart was distraught, feeling his brother's killer had gone free. 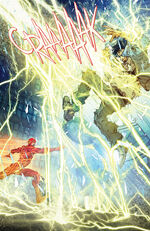 Years later, Barry Allen was now the Flash, and August continued to work in the CCPD.

Around the time of Wally West's reappearance, August was investigating a case where important technology was stolen from S.T.A.R. Labs by a a shady organization. August recognized the group's symbol, connected to his brother's murder, and became reckless with his investigation. Blowing his cover, August was shot at by Black Hole operatives, but, due to the group's experiments on the Speed Force, they had simultaneously created a Speed Force storm that struck August with a bolt of lightning, giving him superspeed. August was fast enough to catch the oncoming bullets and subdue his attackers.

August was eager to become a vigilante like the Flash and, designing his own costume, helped the hero track down all the other people affected by the Speed Force storm. The two met Dr. Meena Dhawan, a new speedster who had created a Speed Force training center to help the new speedsters control their powers.

Around this time, while the Flash and Meena recruited new speedsters together, August was apparently critically injured by a new masked speedster calling himself "Godspeed". According to August, Godspeed had killed a number of recruits to syphon their speed, but he wasn't able to stop him.

August recovered and continued to aid the Flash and the new heroes in defeating Dr. Carver, the leader of Black Hole, and trying to uncover the mystery of Godspeed. Eventually, the villain became sloppy when Barry realized one of his victims was Billy Parks - Jorge Heart's supposed killer. Barry pieced together that August was Godspeed. 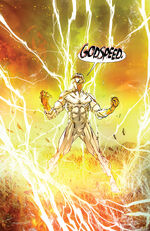 Barry confronted him with the information, and August confessed. He admitted that he had given up on the justice system since his brother's killer had gone free and, with his newfound power, had the ability to become judge, jury, and executioner. August realized after he had gotten his powers that he also had the ability to steal other speedsters' speed. Though for a time he could only do it by killing them, he practiced his skill to be able to do it non-lethally as well. With his new godlike speed, August was able to move so fast as to create a duplicate of himself at any given time, allowing him to give the illusion that he and Godspeed were different people.

After a brief fight, Barry realized that August had become to fast to fight and was forced to retreat when the villain was distracted. In the leadup to the penultimate confrontation, Flash called on the new speedsters to donate their Speed Force connection to him so he could be fast enough to stand a chance against Godspeed. They did so, and Barry tracked down Godspeed for a rematch.

Ready to battle once again, August set his sights on Iron Heights Penitentiary, ready to do what he claimed the Flash was too weak to do - kill his enemies, including Eobard Thawne. However, the new Kid Flash intervened during the final fight and helped the Flash finally take down Godspeed. August was imprisoned in Iron Heights like any other criminal.

While imprisoned in Iron Heights, August became a member of the Rogues, in order to secretly investigate their plan of killing Turbine. After Captain Cold had utilized absolute-zero energy to gain the upper hand against the Flash, August shut down the machines giving off the energy, allowing Flash to defeat Cold. August later told Barry that while in Iron Heights, he had realized what he had done as Godspeed was wrong, and that all he wanted was Barry's forgiveness.[2]

While Central City was being attacked by Grodd and his forces, Barry Allen became desperate and asked August for help and freed him from Iron Heights. [3] August agrees and runs off to help fight a mind controlled Meena, much to the surprise of Kid Flash and Avery Ho, who are working with Barry to defeat Grodd. After the two share their displeasures with enlisting August, Meena engages in a battle with Godspeed. Grodd eventually manages to gain control of August, along with Kid Flash, Avery Ho and Wally.[4] He and the rest of the mind controlled Flash Family fight Barry, until Barry manages to reverse all of Grodd's mind control effects by removing Grodd's connection to the speed force, effectively "curing" him.[5] After defeating Grodd with the help of the newly formed Flash Family, August disappears into the Speed Force, telling Barry, "he was right about him." [6]

The Flash vs Godspeed

Godspeed returns to Iris's workplace in order to tell Barry not to chase after new villain Paradox, knowing this would make him do the opposite. He and Barry race, while Barry questions August on what exactly he knows about Paradox. August manages to dodge all these questions, leading Barry right to Paradox, in exchange for the knowledge on who killed his brother. Paradox orders August to kill the Flash, and a battle ensues. [7] August recounts a story to Barry about a time he saved his life years prior, he had seen the Flash as a hero, but August tells Barry he was wrong about his viewpoint and continues to fight. Barry tries to de-escalate the fight by trying to convince August that Paradox won't tell him what he wants to know, but this only further provokes August. August tells Barry that Paradox has shown him the future, so Barry runs over to Paradox to see exactly what he's shown August. After Paradox reveals his plan against the Flash, Godspeed reveals he was a double agent to gain Paradox's trust and assists Barry in fighting Paradox head-on. [8] 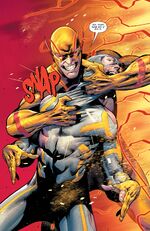 After stopping Paradox, August is killed by the Reverse Flash [9]. Thawne tells a dead Godspeed that no one will remember him and he has seen their future where neither of them have a statue in the Flash Museum. Devastated by Thawne's actions, Barry vows to kill Thawne. Later, Barry visits August's grave to pay his respects [10]. However, when Barry defeats Thawne and resets him he visits the 25th Century where a section of the Flash Museum is dedicated to Godspeed.

In the present, the markings on August's grave are blurred out by a streak of yellow lightning, implying that Godspeed is alive and will be known enough to be immortalized in the Flash Museum along with the other Flashes in the future.[11]

"When August first got his powers, he was maybe faster than Barry Allen, but Barry and Wallace siphoned the speed he stole from them. Now that his powers are more in check, Godspeed needs redemption if he's ever going to tap into his true speed."

Retrieved from "https://dc.fandom.com/wiki/August_Heart_(Prime_Earth)?oldid=2825848"
Community content is available under CC-BY-SA unless otherwise noted.