I am the Dark Knight of God! I am Azrael

Synopsis for "Book One: Simple Sacrifices"

A crazed man dressed in a similar fashion to Azrael, the Order of St. Dumas' Avenging Angel, has captured an undercover police officer who has been working for Johnny Stitches and using a flaming sword, he beheads the man for his supposed crimes.

The police soon find the body and Harvey Bullock investigates the case, which is similar to another case he is already investigating. Vicki Vale and many other reporters cover the events and the news about the murder reach the leaders of the Order of Purity, a faction of the Order of St. Dumas, who are responsible for this new Azrael and his activities. After learning of the unfortunate events, they decide that it's time to seek a replacement for their soldier.

Meanwhile, Michael Lane goes to a church and confesses his crime as an accomplice in Batman's death. The priest who hears the confession is part of the Order of Purity and he informs the rest of the group about Lane. They decide to investigate Lane's past and after finding that most of his family is dead and that he was part of Dr. Hurt's experiments on the search of a replacement for Batman, they decide that he is the most suitable candidate to become the new Azrael.

In the meantime, Michael Lane goes to the Gotham Cemetery, where he visits the graves of almost his entire family. His sister-in-law finds him there and tries to convince him to join her family, but he prefers to stay alone.

Elsewhere, Talia al Ghul has summoned the Seven Men of Death to Gotham in order to find and retrieve the Suit of Sorrows that was stolen from the Batcave.

At the Batcave, Nightwing learns about the death of the undercover police officer and talks to Oracle about the possibilities and they think of Jason Todd and Jean-Paul Valley as their possible suspects, but none of them match the M.O. At that moment, they realize that someone has created a Bat-Signal with the letters R.I.P. on it and Nightwing goes to investigate.

The signal is seen all over Gotham and Michael Lane stops in the middle of the street, just like all the other citizens of Gotham, to take a look at the ominous sign. While all the people wonder if that means that Batman is gone, Adrian Paratino, from the Order of Purity approaches Lane and talks to him about his succession to the cowl. Lane attacks Paratino, but soon he tells him to join him and listen to his offer.

They go to the Church of the Holy Redeemer, where the Order of Purity introduce themselves to Lane and explain their mission and purpose. In the end, they explain that the Suit of Sorrows, which had been stolen from them, is finally under their possession once more and they offer him the chance to become their new Azrael. 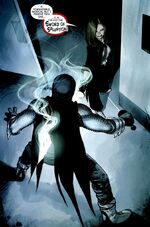 Lane agrees with the condition that they erase the bat emblem from the armor's chest and he leaves the place, telling them to contact him when everything is ready. As soon as Lane steps out of the church, he is attacked by Merlyn and the rest of the Seven Men of Death, but he dodges the arrow aimed to him and he enters back in the temple. Lane goes to the room where the leaders of the Order of Purity are gathered and tells them to find cover, but it is too late, as the assassins have entered the place and they are eliminating them one by one. Lane takes the Suit of Sorrows and puts it on, painting a red cross on the armor's chest and activating the Sword of Sin. Armed with the flaming sword, Lane claims to be Azrael and he manages to defeat most of his opponents. However, the Sword of Sin starts losing its power and Lane is attacked by Talia, who is wielding the Sword of Salvation and uses the weapon to stab Lane across the chest.


Appearing in "Book One: Simple Sacrifices"

Retrieved from "https://dc.fandom.com/wiki/Azrael:_Death%27s_Dark_Knight_Vol_1_1?oldid=2511018"
Community content is available under CC-BY-SA unless otherwise noted.