"Book Three: Why Ask Why?": Michael Lane remembers that during his training to become one of Dr. Hurt's Batmen, he was instructed in swordsmanship and several other fighting methods, despite the fact that he doesn't know what use could he p

Book Three: Why Ask Why?

"An eye for an eye, a tooth for a tooth." Gotham City is finally ready for true justice...


Appearing in "Book Three: Why Ask Why?"

Synopsis for "Book Three: Why Ask Why?"

Michael Lane remembers that during his training to become one of Dr. Hurt's Batmen, he was instructed in swordsmanship and several other fighting methods, despite the fact that he doesn't know what use could he possible have for it. During his instruction, Lane was told that he was physically prepared to work as a vigilante, but he needed to understand the motivation that kept Batman and his allies fighting.

These memories come to him as Lane fights Nightwing in the Batcave. Lane uses the Sword of Sin against Nightwing, who deduces that it is the weapon used to murder several victims over the past weeks, including a police officer. Lane refuses to explain the situation to Nightwing, deeming it as too complicated, but Nightwing already knows the entire truth about the whole situation and how he managed to get the Suit of Sorrows.

In the meantime, Peter Farelli lies to Harvey Bullock about the videotape from the DMV and tells him that there was nobody in that footage. Bullock has no option but to summon Jamie Harper and go to the Church of the Holy Redeemer to interrogate the priest. Meanwhile, the Order of Purity are discussing how are they going to turn away the attention of the police when they come to investigate at the churh and Adrian Parantino suggests Garret Day to start making up a story to tell when the time comes.

At that moment Jason Todd captures some criminals and he is recognized by M.J. Lane as his uncle Michael. The kid was obviously mistaken because Todd was using the cowl Lane used when he was Bat-Devil. Todd's activities were caught on camera on Oracle's surveillance system and she sends the footage to the Batcomputer, where Nightwing and Azrael watch the scene. Lane recognizes his cowl and tries to leave the cave to stop the impostor but Nightwing prevents him from leaving and stuns him using an electric tazer. Nightwing then injects some chemicals to make Lane forget the events.

Later, Nightwing goes to Talia's place and informs her that he is going to take full responsibility of Lane's activities as Azrael and he also takes away the Sword of Salvation from her.

The next morning, Lane wakes up in his apartment and finds the Suit of Sorrows and both swords on his door with a note from Nightwing, allowing him to use it, but warning him that if his actions ever become dangerous, he will be stopped. Someone knocks the door and when Lane opens it, he finds her sister-in-law, Jenny, who wants to talk to him but he refuses to let her in and closes the door. Jenny starts screaming that she needs Michael's help to feel alive again after his brother's death. Michael opens the door, lets her inside and they have sex. This and many other Lane's activities are watched closely by the White Ghost, who informs everything to Ra's al Ghul. Ra's wants to take the suit back, but he decides to let Lane keep it until he surrenders to madness. In a final statement, Ra's reveals that the Order of Purity is entirely controlled by him.

A short time later, Bullock interrogates Day, but he can't get much information, as Day has prepared a good alibi to cover the Order's activities. Later, the members of the Order are discussing the future of their organization and they are interrupted by Lane, who wants to eliminate them. 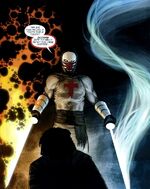 Azrael Strikes Back
The Order takes Lane to Leland McCauley's Brownstone and they offer him the place to be his home and base of operations in exchange of obediance and alliegance to them. Lane, who thinks that he can always murder them later, agrees and takes the place.

A couple of days later, Lane is moving his things out of his apartment when Farelli visits him to warn him about the police investigation on the new Azrael. Farelli also tells him that he won't cover his activities to the point where his life and carrer become at risk and Lane agrees.

As Azrael, Lane starts taking evil-doers down and punishing for their crimes and delivering true justice.

Retrieved from "https://dc.fandom.com/wiki/Azrael:_Death%27s_Dark_Knight_Vol_1_3?oldid=2511020"
Community content is available under CC-BY-SA unless otherwise noted.