B'wana Beast is a super-hero who has the ability to communicate with animals, and merge them together into more powerful creatures. Originally he is a ranger in Africa who drinks an elixir that transforms him, and fights against evil with the help of a gorilla named Djuba. Eventually he would retire and name Freedom Beast as his successor. Possessed by the evil Antagon entity, he later becomes a villain named the Shining Man and meets his death. B'wana Beast was created by Bob Haney and Mike Sekowsky, first appearing in Showcase #66. (1967) 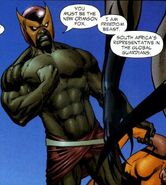 B'Wana Beast
Other Media
The Brave and the Bold