Backlash is a half-Kherubim super-hero and warrior in the Wildstorm Universe named Marc Slayton. Born in Atlantis, he has lived for several thousand years gaining combat experience with most weapons. His latent special power is generating psychic energy whips, released by exposure to the Gen-Factor. He has been a member of Department PSI, International Operations, StormWatch, Team One, Team Seven, Team Zero and Wildcore. His daughter and successor is Jodi Slayton who became a member of WildC.A.T.s. There is also a member of New Wildcore named Kid Backlash. Backlash was created by Jim Lee and Brett Booth, first appearing in StormWatch #3. (1993)

In the mainstream DC Universe, the name Backlash is used by a Nazi super-villain. He is a member of the Aryan Brigade with the ability to extend his arms into powerful tentacles, using them to grapple his opponents. Backlash was created by Michael Jan Friedman and Sal Velluto, first appearing in Justice League Task Force #10. (1994) 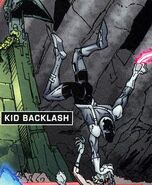 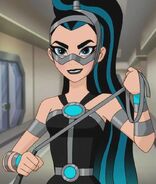