Barack Obama is the 44th President of the United States, or, if the altered timeline with presidents Lex Luthor, Pete Ross, Jonathan Horne and Martin Suarez is taken into account, the 47th. During his presidency, DC returned to using real presidents (the previous four had covered George W. Bush's terms in office and some of Obama's). Suarez was still president in 2011 and Obama first appeared later that year.

In the real world, he served as President between 2009 and 2017 and was a Democratic senator for Illinois before that. His Vice President was Joe Biden, who would later become the 46th President. Obama was the first African American to be Commander in Chief and was eventually succeeded by Donald Trump. 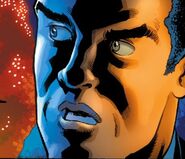 Barack Obama
TV Series
The Brave and the Bold