You missed my wedding, Diana... but you'rrre still in time for the feast. You said you would come. You lied.

Barbara Ann Minerva is the Cheetah, a feline foe of Wonder Woman. Prior to her transformation, Barbara was a gifted archeologist and close friend of Wonder Woman, until she was captured by the plant god Urzkartaga and imbued with the powers of the cheetah.

According to Wonder Woman's false memories, Barbara Ann Minerva was raised in a group home in Idaho, run by a woman named "Aunt Lyta". The group home, Amazonia, was run along the lines of a cult, where the occupants were trained to view life as a hunt, and all other people as either competitors or prey. On her last day there, she killed her brother in a fight to the death, proving her worth to their sacred cause: retrieving the God-Killer Knife.[3]

Building a series of false identities, Barbara Minerva got a job in Washington, D.C. as an expert in antiquities, and searched. Her life was immensely enriched by meeting Wonder Woman, a member of the Amazon culture she had been raised to admire, but when Wonder Woman laughed at her beliefs, Barbara decided to bring her down. She convinced Wonder Woman to let her into the Black Room, A.R.G.U.S.' special containment facility for magic artifacts, stole the God-Killer Knife, and stabbed herself in the chest in the name of her goddess.

This act empowered her, turning her into a cheetah woman, with the cheetah's characteristic hunting prowess and speed. She would spend the next six years committing criminal acts, though Wonder Woman was frequently on hand to stop her, always believing that the knife had somehow corrupted her and that she could be saved.[4] 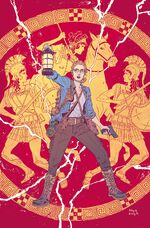 Barbara Minerva before becoming the Cheetah

Barbara's true origin is vastly different. In truth, she was born in Oakstone Abbey, Nottinghamshire, the only child of Lord and Lady Cavendish. After the death of her mother, she became more and more introverted. Under the guidance of her tutor, Ms. McLeod, she became interested in Greek mythology, especially the Amazons. Her father considered it escapism, and would rather teach her the world was cruel and unfair.

She wasn't deterred, and at 26, she had received two PhDs and was working as an archeologist in Ukraine. Though she was mocked by her colleagues, she found her first solid evidence of Amazons: the tomb of Lysippe, 12th Queen of the Amazons. Unfortunately, heavy rains caused the cave to collapse. Some of her research was stolen by foreman Viktor Yakuvic. She chased him around the Mediterranean, until she came to Tunisia. She had traced a route which she thought was the route the Amazons followed. But when she found Viktor's corpse and received nourishment from an old crone, she realized she had it backwards: the route was not where they migrated to, it was where they came from. However, when she came to the end of her track, an uncharted island in the Black Sea, she found no sign of civilization.[2]

Disheartened by her failure, Barbara went on to teach archeology at a university. She was contacted by Etta Candy to help translate the unique dialect of Diana, who had recently arrived on U.S. soil.[5] Barbara befriended Diana and taught her about the culture of mankind. After helping Diana settle into her role as Wonder Woman, Barbara was contacted by Veronica Cale, who offered to fund an expedition to Africa to investigate the plant god Urzkartaga. Diana was worried for Barbara's safety and gave her a GPS beacon to contact her if she was in trouble, but Doctor Cyber deactivated it on Veronica Cale's orders. To distract Wonder Woman, Cale and Doctor Cyber staged disasters around the world. When Diana finally arrived to check on Barbara, she was stunned to discover that Urzkartaga had made her his wife and transformed her into the Cheetah. Cheetah was furious at Diana for abandoning her, and joined Cale's Godwatch team, which worked against Wonder Woman.[6]

Secrets of the Cheetah

Five years after the creation of the Justice League, Cheetah was a member of the Secret Society of Super-Villains. In the wake of the Graves Incident, Cheetah got a final piece of data necessary to track down a tribe in the Congo who had been the original custodians of the God-Killer Knife. As she had before, Wonder Woman went to stop her - but this time, she brought the Justice League. Thanks to the interference of the larger group of heroes, Cheetah was caught.[4] After being apprehended by the heroes, the Cheetah went to prison, where she contacted Black Manta, indicating that all was as it should be. She was subsequently chosen to join the "Suicide Squad", a black ops team of supervillains who worked for the American government.[7]

Cheetah was broken out of jail by the Crime Syndicate and recruited to be part of their forces.[3] Lured to Happy Harbor alongside every other supervillain, she was in the audience when the Crime Syndicate revealed that they had killed the Justice League. As proof they offered signature items, including Wonder Woman's Lasso of Truth, which Cheetah immediately pocketed.[8]

A loyal soldier serving the Crime Syndicate's brief takeover, she led a gang of animal-themed villains called the Menagerie, who terrorized New York from a hideout in Central Park. She was defeated by Steve Trevor of A.R.G.U.S., who needed the Lasso as part of a plan to save the world.[9] A month later, Cheetah was hired by the billionaire activist John King to kill Green Arrow. Due to the intervention of a small army of masked heroes, she was unsuccessful.[10] Cheetah was subsequently depowered by a strike against the magicians of Earth by a group of Elder Gods.[11] 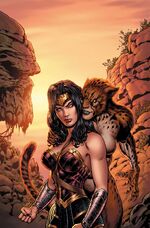 After Wonder Woman's realization that she was unable to go to Themyscira or Mount Olympus, she travelled to Africa in search of Cheetah. She was met with aggression from Cheetah's forces, and ultimately Cheetah herself. The battle continued until Wonder Woman revealed to Cheetah that she was unable to locate Themyscira and needed her enemy's help.[12] In exchange for Minerva's help in finding Themyscira, Wonder Woman agreed to help her kill the god Urzkartaga, Cheetah's husband, and end Minerva's curse. The pair battled their way through Urzkartaga's minions, the Bouda, and defeated Andres Cadulo, a worshiper of Urzkartaga that planned to sacrifice Steve Trevor to the plant god.[13] With the help of Steve's forces, Diana and Cheetah were able to kill Urzkartaga, freeing Barbara from the curse of the Cheetah. Once she reverted back to her human form, Minerva agreed to help Wonder Woman find her way back to Paradise Island. She revealed to Wonder Woman that the island of Themyscira was divine in its nature instead of it being a physical place.[14]

Veronica Cale's Godwatch team began their assault on Wonder Woman, and Barbara helped Diana, Steve and Etta Candy defend against Godwatch's forces. Barbara agreed to meet with Veronica and urge her to put a stop to Godwatch, as she had been a member when she was Cheetah. During their conversation, Cale urged Minerva to become the Cheetah once more, this time without Urzkartaga's control. Barbara refused, so Veronica ordered Colonel Poison's team, who had since closed in on Steve and Etta, to proceed with their attack. Barbara was forced to watch the assault by Doctor Cyber. In order to spare the lives of her friends, she agreed to accept the curse of the Cheetah once again and was transformed by Cale.[15] After her transformation, Veronica used Cheetah to open a gateway that led to Tartarus, the realm beneath Themyscira in which Ares and Veronica's daughter Isadore were imprisoned.[16] However, Cheetah was unable to enter the gateway herself, and she realized she had been manipulated by Veronica. Cheetah sought her revenge, breaking in to Cale's home and seriously wounding her. Wonder Woman arrived before she could kill Veronica and attempted to appeal to the humanity within Cheetah, but Barbara retorted that she didn't want her old life back and that Cheetah is who she is. Cheetah continued her attempt to kill Cale, but Wonder Woman continued to restrain her, until Cheetah broke down in tears at who and what she had become.[17]

Cheetah was one of the members handpicked by Lex Luthor to form the new Legion of Doom. She was tasked, together with Black Manta, with the mission of killing Poseidon, thanks to one of the seven forces freed by the Source Wall's rupture, the Tear of Extinction, that Cheetah used on her claws.[18] After killing the Olympian, Cheetah took part in the retaking of the Totality inside the Hall of Justice, during the drowning of the Earth. She also destroyed the Graveyard of Gods, which was a key part to continue the unlocking of the Totality itself.[19]

Retrieved from "https://dc.fandom.com/wiki/Barbara_Minerva_(Prime_Earth)?oldid=2845648"
Community content is available under CC-BY-SA unless otherwise noted.