Barbatos also known as the Bat-God was a being created by the World Forger to consume the universes which fall back decayed. He claims to be the bat that Bruce Wayne saw through the window the night he became Batman.

In the earliest days of existence, before the Multiverse became reality, a spark of potential created matter and anti-matter. After that, two siblings tasked with monitoring creation came to be. Along with them, though, came a third being known as the World Forger. Unlike the others, it was set to watch over creations that would exist in the future. The World Forger made its home in the Forge of Worlds, a hidden place inside the sea of possibility that would later be renamed the Dark Multiverse. For eons, he created universes based on the hopes and fears of every living thing. While the most stable universes became part of the main Multiverse, The Forger would dispatch its dragon to destroy the unstable worlds so their energy could return to the Forge and be used anew. The name of that dragon was Barbatos. Eventually, Barbatos' lust for destruction led him to kill his master and steadily corrupt the Forge of Worlds. Because he was no longer doing his job, the unstable worlds persisted beyond their time and became part of the Dark Multiverse.[2]

Eventually Barbatos set his sights on destroying the regular Multiverse. He was able to come to Earth at one point, and when he did, the Tribe of Judas worshipped him as a god. However, he was repelled from the regular matter Multiverse during the Final Crisis.[3] At one point of time, Barbatos chained Mandrakk who was banished in the Dark Multiverse by Superman during the Final Crisis.[4] Batman was sent back in time to the dawn of man by Darkseid with the Hyper-Adapter, he was noticed by Barbatos, who saw the similarities in the emblem that they used. Barbatos decided that he would turn Batman into a portal that would allow him access to the regular matter Multiverse in order to control it, with Hath-Set as his first conduit.[5] Barbatos, at one point of time, was hurt by Hawkman's mace.[6] Some time later, he managed to capture Hawkman in one of his many incarnations, and named him his dragon, mutating him into becoming defender of the Forge of Worlds.[2]

Many centuries in the future, Barbatos' followers started to secretly prepare Batman to become the doorway for Barbatos to enter Prime Earth from the Dark Multiverse. His agents, by now known as the Court of Owls, planned to infect his body with each of the five heavy metals from the Dark Multiverse. In the meantime, Barbatos began looking for allies for his cause through the different dark matter realities. His search led him to one of the worst versions of Batman to ever exist: The Batman Who Laughs. Baiting him with the promise of destroying worlds beyond his own, this Batman became his second-in-command and assembled other evil Batmen to support them, forming the Dark Knights.[7] At point, the deity Perpetua had promised things Barbatos to draw him up into the light.[8]

Eventually, Batman learned of the Owls' plan, and tried to go back in time and stop Barbatos once and for all. However, Batman fell into a trap and was exposed to the final metal. Batman was transformed into the doorway which allowed Barbatos and his Dark Knights to enter from the Dark Multiverse. At this point Barbatos had his subjects kill the Court of Owls before personally draining Superman and Wonder Woman of their life force.[6] 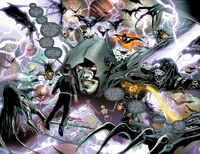 Barbatos reveals the "truth" to Bruce

In the Dark Multiverse, Barbatos put Batman under the illusion of being an elderly man reading a story about his adventures from his time as Batman to his granddaughter, Janet. However, Bruce noticed that his memories and the story didn't match, and this allowed him to break free from the illusion. Barbatos then confronted Bruce and revealed to him that the only reason Batman had become a great hero is because he willed it, that he had shaped Bruce to became Batman and that he is nothing without him. Barbatos informed Bruce that the Dark Multiverse had created thousands of worlds built by his fears and he picked the darkest among them to be sent into the Prime Earth, and that they were winning. Faced with these revelations, Bruce begged in horror not to see or know anything more, surrendering to Barbatos. Hearing this, Barbatos sent Bruce back to the illusion and Bruce continued to read the story.[5]

While the Dark Knights ravage the world and sabotage the efforts of Earth 0's defenders against them, Barbatos watches the madness unfold from the summit of Challenger's Mountain. To stay appraised of his plan's progress, he would typically talk to the Batman Who Laughs for information. The next time Barbatos actually makes a move is when Batman Who Laughs calls him to aid in stopping Cyborg, who manages to access the full power of his Mother Box, becoming an unforeseen obstacle. When the captured heroes escape with Cyborg's help, Barbatos becomes concerned that Cyborg's power-up could present a real problem, but the Batman Who Laughs is sure that he will not cause any real problems.[9]

Later, Barbatos returns to Gotham and waits until the Earth gets close to fully sinking into the Dark Multiverse. When the Batman Who Laughs gives him the signal, he begins to roar out his Anti-Music. His cry penetrates the dimensional barrier separating the positive and dark matter realities, summoning his dark army to overtake Earth.[10]

Clashing their metals together (Diana's bracelets and Kendra's mace), the two heroines succeed in helping Green Lantern, Mr. Terrific, Aquaman and Deathstroke fight back against the Dark Knights, Terrific convinces Plastic Man to awaken, turning the tide of battle. Reaching the Dark Forge, Kendra manages to break Carter out of Barbatos' corruption (reigniting the Forge in the process), Diana reaches Batman and Superman (donned in Tenth Metal, the prime constitute of the World Forge), and Barbatos is confronted by Flash and Cyborg, who have gathered reinforcements from other realities (including the "53rd Earth").

Refusing to lose, Barbatos reveals his last resort; using the combined power of the positive energy of his prisoner Over-Monitor, the Anti-Monitor's brain's negative energy, and the Batman Who Laughs' dark energy, he plans to leave nothing but darkness. However, an unexpected team-up of Batman and the Joker halts this plan, the Justice League defeat the remaining Dark Knights, and Hawkgirl subdues Barbatos. After Over-Monitor explains that all living things have trace amounts of Tenth Metal, the League proceed to use this power to pull Earth out of the Dark Multiverse (it also results in the Source Wall shattering). After the Justice League lifts their Earth out of the Dark Multiverse, Barbatos is left tied down at the bottom of the Dark Multiverse, locked in chains made from Tenth Metal by the Over-Monitor. There, he would be forced to watch the Forge of Worlds burn bright again, creating new worlds.[11]

After Perpetua came into ascendance, her reclaimed power could be sensed across all across the Multiverse with even the captive Barbatos sensing it from within the Dark Multiverse.[12]

During Perpetua's invasion of the multiverse Barbatos was moved under Castle Bat, albiet still chained.

While Superman, Batman, and Wonder Woman enacts their plan to travel back to the times of the three great crises in order to stop Perpetua they encounter the Bat God who taunts them. He claims that every crisis is an example of how they've failed again and again rather than how they succeeded, and that a crisis was the result of things reaching the tiping point. The trinity doesn't listen and Superman knocks him out with a punch. [13]

Retrieved from "https://dc.fandom.com/wiki/Barbatos_(Dark_Multiverse)?oldid=2850909"
Community content is available under CC-BY-SA unless otherwise noted.