Barry Allen is The Flash, a speedster who protects Central City with the help of his allies at S.T.A.R. Labs. He is a founding member and leader of Team Flash. 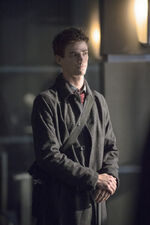 As a child, Barry Allen's life was uprooted forever by the death of his mother. The police arrested his father for the crime, but Barry had seen a strange man with inhuman powers in a yellow suit commit the deed.

The death drove him to find answers, researching cases of paranormal activity and possible superhuman forces at work. He also found answers in science, getting a job as an intern with the Central City PD Crime Scene Unit. However, he was perpetually late.

Hearing about the Starling City vigilante, he looked into the stories about him, keeping a running tally of the colorful criminals he caught. He followed and developed theories as to the man's operations. When a seemingly impossible case cropped up in Starling City, Allen used deferred sick days to travel across country, claiming that this case connected to something happening in Central City and inserting himself into the investigation. 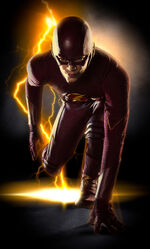 Barry Allen as The Flash

He proved instrumental to solving the case, even meeting the vigilante and learning his secret identity. Parting with the man on cordial terms, he returned to his duties mere seconds before Central City's new particle accelerator backfired, showering the city with dark matter. In the ensuing confusion, Allen was struck by lightning, but survived. Allen was in a coma for 9 months. During the time he was in a coma, he was moved to S.T.A.R. Labs. He awoke from his coma with the power to move at superhuman speeds, and met Cisco Ramon and Caitlin Snow.

He later would later join them in addition to Harrison Wells as part of Team Flash. Later he encounters with numerous meta-humans and villains, such as, Captain Cold, Heat Wave, but, he would encounter The Man in the Yellow Suit who killed his mother

The Man in Yellow

At a later point in time, Barry would find out that his mentor, Harrison Wells, was secretly the Reverse Flash, and the man who had killed his mother. Wells' real name was Eobard Thawne and was from the future. He had traveled back and got stuck in Barry's period of time. Wells engineered the particle accelerator explosion and began mentoring Barry and helping him get faster so Wells could return to his time-period. With the help of the Arrow and Firestorm, Barry was able to defeat Wells.

At one point point in time, Barry and the rest of Team Flash were visited by a speedster from Earth-2, calling himself Jay Garrick. Jay informed the team of a powerful speedster named Zoom who had stolen his powers. Jay began working with Team Flash to stop Zoom, and became something of a new mentor to Barry.

Following the confrontation of a new speedster named Trajectory, Barry and the team realized that Jay Garrick was actually Zoom. After the team discovered new revelations about Zoom's real history as Hunter Zolomon, Barry attempted to lure Zoom into a trap, but this backfired when Zoom escaped and captured Wally West, forcing Barry to surrender his speed. With the help of his team, Barry recreated the conditions of the night he was given his speed, and regained his powers.

Barry's father is later kidnapped by Zoom and killed in front of Barry. Shortly after, the team tried to take down Zoom on their own, resulting in the abduction of Joe West. Realizing he has no choice, Barry agrees to a race arranged by Zoom, who is planning on destroying the Multiverse, leaving only Earth-1 behind. Barry races Zoom, creating Time Remnants to help him. Zoom is finally defeated and is taken away by Time Wraiths and into the Speed Force.

Sometime after, Team Flash returned to Earth-2 and rescued the man Zoom had been keeping captive, and it is revealed that the man was the actual Jay Garrick and Barry's father's Earth-3 doppelganger.

Barry, emotionally distraught after his father's death, time-traveled back to the night his mother was killed to save her, drastically changing the timeline.

After defeating the Reverse-Flash and returning back to his time, Barry realized he had drastically changed the timeline. Both his parents were alive and Wally West was the Flash. Realizing his mistake, Barry allowed Reverse-Flash to go back in time to kill his mother and reset the timeline, causing a third timeline to set in.

Returning back to present day after undoing his mistake, Barry discovered that things had still changed, such as his friendship with Cisco, the relationship between Iris and Joe and a new begrudged colleague at C.C.P.D.. Adjusting to these changes, Barry started investigating "husks" whilst trying to secretly help fix the lives of his friends. During this time, an enigmatic figure known as Alchemy began enlightening those from Flashpoint with their alternate timeline memories and powers, such as the Rival. Discovering that Alchemy worked for a self-proclaimed "speed god" called Savitar, Barry and his team began trying to find a way to stop Savitar from breaking out of his prison. Barry later admitted the truth about his manipulation of the timeline to the team, upsetting them and effectively placing his friendship with Cisco in jeopardy. During this time, Barry learned that Wally obtained his Flashpoint self's speed thanks to Alchemy and attempted to dissuade him from following in his footsteps for Joe's sake.

Barry responded to an alert from an incoming object and realized it was an alien ship, reporting back that aliens had landed on Earth. A.R.G.U.S. later responded, with Lyla Michaels confiding the truth to Barry and the others about the existence of a species called "Dominators" and how they've been abducting people since the 1960s. Aware of the worldwide danger this signified, Barry called upon Green Arrow and his team, Supergirl (of Earth-38) and the Legends to stop the Dominators from invading. Whilst preparing for a counterattack, Barry was informed by Martin Stein and Jefferson Jackson about a voice message from his future self, telling them to trust no one, not even himself. Attributing this to his creation of Flashpoint, Barry told them the meaning of the message and was forced to later tell the truth to the others, realizing that not only had he effected his team's lives but also that of John Diggle (whose daughter was erased and replaced with a son). With the makeshift group's trust in Barry broken, they went without him to investigate the origins of the Dominators and to stop the invasion from occurring. Oliver and Barry stayed behind and were the ones forced to battle their friends when the Dominators mind-controlled them. Barry, realizing that the mind-controlled Supergirl could help destroy the device, taunted and tricked her into doing so, undoing the effects. The group of heroes eventually regained their trust in Barry and were able to work together once more. However, Oliver and many non-powered individuals close to him were abducted by the Dominators and placed into a reality where none of them became vigilantes. Barry and some of the remaining heroes left to find a way to hack into the Dominator's technology. After doing so, Barry was told that the reason why the Dominators attacked Earth was due to his actions in making Flashpoint, representing the threat of meta-humans being able to do unimaginable things with their abilities. Barry chose to take responsibility for his actions and willingly gave himself up, to which his allies convinced him not to. With a way to disrupt the Dominators across the world, Barry races across the planet placing the devices on as many as possible in order for Felicity to enact the plan. Despite being successful, the Dominators used a meta-bomb as a last-ditch effort in eliminating meta-humans. Barry witnessed Firestorm transmute the bomb into water, negating the effects and forcing the Dominators to flee.

Barry, still facing the threat of Savitar and Alchemy, enlisted Jay Garrick of Earth-3 for help. Uncovering the true identity of Alchemy, being his colleague Julian Albert, Barry tried to persuade him to be a middleman between him and Savitar in order to glean information out of him. Being told of a prophecy that including one of them dying and another betraying the team, Barry ultimately decided to throw the Philosopher's Stone connected to Savitar into the Speed Force, having the adverse effect of throwing Barry into the near-future. Witnessing his future self failing to save Iris, who was brutally killed by Savitar, Barry returned to present day and obsessed over preventing that future from coming to pass. Barry kept the truth secret but eventually told the team sans Iris herself. Drawing up a list of events that occur leading up to her death, Barry obsessed over changing the outcome of every event, such as having Wally, now Kid Flash, stopping Plunder instead. After a run-in with a bounty hunter from Earth-19, called Gypsy, Barry and the team were able to save the new Harrison Wells, H.R., from facing execution for traveling between universes. Barry later concluded that it should be Wally to save Iris instead and began training him to increase his speed.

When Jesse Wells returned from Earth-2 with news of her father's abduction at the hands of Grodd, Barry, Cisco, Caitlin and Julian all traveled to her Earth to rescue him. However, they were captured and awoke in Gorilla City, where Grodd asked Barry to defeat their leader, Solovar to prevent an imminent attack on Central City. After heeding to his request, Barry discovered that Grodd lied and only wished to usurp Solovar to attack the city himself. Conjuring a plan to trick Grodd and escape, Barry had Caitlin fake his death with her newly attained cold-powers and, taking Harry with them, escaped back to Earth-1. Unbeknown to them however, Grodd had captured Gypsy and secured a means of traveling to Earth-1 to fulfil his plan. Barry and the team were forced to battle Grodd and his army in the streets whilst Cisco and Gypsy went to find Solovar to prove Grodd's betrayal. Having defeated Grodd's forces and exposed Grodd's plan to Solovar, Barry considered killing him once and for all but wisely left Grodd in Solovar's hands, ending the threat.

Despite having presumably destroyed the Philosopher's Stone and kept Savitar trapped, Wally and Barry found themselves haunted by the villainous speedster. Wally informed Barry that Savitar has been affecting his mind, making Barry angry for keeping such a thing a secret. Warped by his protectiveness over Iris, Barry was convinced that Wally was being controlled like Julian and fired him from the team. Fearful that Savitar's possible return might once again place Iris in danger, Barry asked Cisco to act as another middleman in order to talk to Savitar. After being teased with the possibility that the Philosopher's Stone may not be totally destroyed, Barry learned that Caitlin had kept a piece of it hidden in the hopes of getting rid of her powers.

Retrieved from "https://dc.fandom.com/wiki/Barry_Allen_(Arrowverse)?oldid=2770465"
Community content is available under CC-BY-SA unless otherwise noted.