The world isn't like the one I left behind. I mean... It's the same, but it's weird, something's missing...

Bart Allen, also known as Impulse, is the grandson of Barry Allen from the future and a speedster superhero. He was somehow trapped in the Speed Force and forgotten by all until the Force Barrier was broken by Barry and Wally West, which finally allowed him to escape.[2]

Bart Allen as Impulse, was fighting Mirror Master, when suddenly he was hit by his mirror gun. The gun sent Impulse to another dimension, where his physical form began to disintegrate. When Impulse escaped the dimension, he found that he was in the future. A future where Arrowette, Wonder Girl, Kid Flash, and Robin are dead. When Bart passed out from stress, he awoke in Arkham Asylum with a psychiatrist Harley Quinn. Harley explains that Bart Allen mysteriously disappeared years earlier, and that "it was the Bermuda triangle of superheroes." After Bart escapes Arkham he runs fast and returns home. [3] However when he returns home, due to a mysterious force messing with the universe timeline, ten years of history were removed from existence, but, because Bart was outside of time, his memories of these formerly true events remained with him.

In these ten years, Wally West would have witnessed Barry Allen sacrifice himself to save the Multiverse. Without his mentor, Wally would have filled the role and become the next Flash and would take on Bart Allen as his sidekick.

However, because of the timeline interference, none of these events actually happened, and Bart was the only one who remembered certain people and teams, such as Conner Kent, and Young Justice.

While Barry and Wally battled Zoom in the Timestream, Bart attempted to call out for Wally from inside the Speed Force, although Wally was unable to hear him.[2]

Sometime after the Flashes failed to stop Zoom, Bart discovered that the Force Barrier had been broken, allowing him to finally escape the Speed Force.[2]

Bart attempted to seek out the Flash Family members and his old Titans teammates, but couldn't find anyone. He later fought Godspeed and made him retreat.[4] 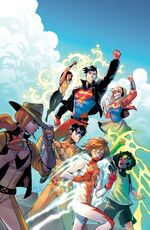 Bart showed up when Metropolis was invaded by inhabitants of Gemworld and was re-united with Robin and Wonder Girl. With this, Bart claimed that Young Justice was back. Shortly after this, Bart and his friends were pulled into Gemworld and he woke up without them, only to find Conner Kent instead.[5]. After the rest of the team united, they were all confronted by Lord Opal. Impulse stole Opal's piece of Kryptonite, which allowed Conner to defeat Opal. When the team was believed to be sent home, they were banished into the Multiverse, by the council of Gems. While traveling throughout the multiverse, Impulse harassed the residents of all the worlds that they traveled to.

Retrieved from "https://dc.fandom.com/wiki/Bart_Allen_(Prime_Earth)?oldid=2838250"
Community content is available under CC-BY-SA unless otherwise noted.