When Commissioner Gordon was removed from his charge, his replacement destroyed the Bat-Signal using an axe and ended the GCPD's connection with Batman. However, when Batman uncovered a large criminal network behind Gordon's demotion, the Mayor reinstated Gordon as Police Commissioner and the Bat-Si

When you light that beacon, Commissioner-- I'll come! That's the way it's always been, and the way it'll always be!

The Bat-Signal is a large projection lamp that casts the silhouetted shape of a bat across the sky of Gotham City. Commissioner James Gordon incorporated it as a means of contacting Batman, whenever he was needed and it was placed on the roof of the headquarters of Gotham City Police Department.[22] As Batman's existence is not officially recognised by the Gotham City authorities, the Bat-Signal is explained as a method of using the "urban legend" around Batman to terrify the criminal class of Gotham.

When Commissioner Gordon was removed from his charge, his replacement destroyed the Bat-Signal using an axe and ended the GCPD's connection with Batman. However, when Batman uncovered a large criminal network behind Gordon's demotion, the Mayor reinstated Gordon as Police Commissioner and the Bat-Signal was repaired.[1]

The Bat-Signal played a very important role on Batman's crime-fighting career and soon it became a tool besides a summoning beacon. During it's early days, some criminals shot the Bat-Signal and others stole it to prevent communication between Gordon and Batman.[2] For this reason, Batman designed a new Bat-Signal with the following features: 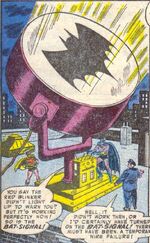 Some time later, an elder police officer, who was no longer capable of going out on missions to the streets, was placed in charge of activating the Bat-Signal. For this purpose, a small light bulb and a phone connected to Commissioner Gordon's office was installed in order to notify Sergeant Harvey Hainer the times when he had to activate the Bat-Signal.[3]

The Bat-Signal was the main contact method between Batman and the GCPD and Sergeant Harvey Hainer was in charge of activating the signal. However, this Bat-Signal was largely replaced by Batman's Hot-Line, which was a direct telephone between Gordon's office and the Batcave. The Bat-Signal was then used as the last resort to get in touch with the Caped Crusader.[4]

With time, the Bat-Signal became the primary way to contact Batman, as the Dark Knight tried to avoid being at everyone's reach. Knowing of the importance of the Bat-Signal, the Signalman captured Batman and tied him inside the giant searchlight, in hopes that he would be burned alive when Commissioner Gordon activated the signal. Fortunately, Batman managed to break free before the signal could be activated, but he had to break through the glass to escape. With the Bat-Signal broken and damaged, Gordon had to use public funds for the repair.[5]

During a re-election campaign for Police Commissioner, Gordon and Batman were attacked by Gordon's current enemy who sought to eliminate them both. The first failed murder attempt on Batman caused the shattering of the glass lamp of the Bat-Signal, which Gordon soon had repaired. However, the repair people were hired thugs by Gordon's opponent who placed a bomb in the Bat-Signal, which would explode with the heat of the light. Gordon was saved by Batman just as the bomb exploded, destroying the Bat-Signal.[6]

Commissioner Gordon also included a mobile Bat-Signal on his police car, which he used to summon Batman to different locations around the city, where his quick assistance was most needed.[7][8] When Sergeant Harvey Bullock was granted permission to the rooftop of the GCPD HQ, he caused minor and major damages to the Bat-Signal as he once accidentally spilled coffee on top of it[9] and later smashed half of the signal's glass, while putting his usual clumsy act.[10]

The Bat-Signal was a large searchlight located on the rooftop of the GCPD Headquarters.

There have been many accounts of the Bat-Signal's first appearance and the circumstances in which this happened. Since it's hard to tell which one is canon and which isn't, this section will provide all instances for a historical perspective. 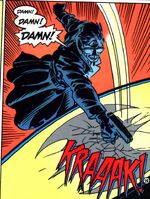 Eventually, the Bat-Signal was broken by Sarah Essen during an outburst of rage after which she shot the signal. Whenever it was lit, the shape of the bat appeared to be broken.[14] It was soon repaired and fully operational. However, the Bat-Signal would soon be broken again, this time by James Gordon. After Jean-Paul Valley took the mantle of the Bat, Gordon became suspicious of the Batman's identity. His worries proved true when Batman let Abattoir die, causing the death of the killer's last victim. Gordon's trust in Batman was totally damaged and after an unsuccessful discussion with the new Batman, Gordon smashed the signal with his gun, breaking it as a symbol of his disconnection from the vigilante.[15]

When Gordon learned that the original Batman had returned to claim his rightful position, he had the Bat-Signal repaired and used it the first night to summon his trusted friend.[16]

Following No Man's Land, a new Bat-Signal was given to the GCPD, which had a number of additions, including a laser writer, built into it. (The laser writer was used to skywrite directional arrows and street addresses to guide Batman straight to a crime scene, without the Caped Crusader wasting time stopping off at police headquarters.)

After Batman defeated The Body, he asked the new Police Commisioner Michael Akins to keep the signal on as a way to send a message to his enemies.[17]

However, when Akins declared vigilantes illegal, he removed the Bat-Signal, though it ended up self-destructing in the process. The original one was returned soon thereafter.

During a brief period when Batman was out of the country, The Question replaced the bat shape on the front of the signal with a large question mark.

When Batman went missing after his confrontation with the Black Glove, Gordon activated the signal hoping to summon Batman, but he is disappointed when Geo-Force and Katana arrive, looking for Batman as well.[18]

When word about Batman's death spread, a Bat-Signal was turned on with the letters "R.I.P." engraved in it. Gordon followed the source of this signal to Arkham Asylum, where he found a makeshift signal left behind after the whole place was destroyed.[19] After learning of a new Batman, whose methods included murder and torture, Gordon decided to keep the signal off until it was safe to use it again.[20]

Retrieved from "https://dc.fandom.com/wiki/Bat-Signal?oldid=2787165"
Community content is available under CC-BY-SA unless otherwise noted.